Mark Wiens: Wiki, Bio, Wife, Net Worth.. All About the Famous Food YouTuber

Mark Wiens was born on February 26, 1986, in Phoenix, Arizona, United States. His star sign is Scorpio.

He is originally American of mixed ethnicity, born to an American father and a Chinese-American mother.

Because of his parents’ profession, his family traveled around the globe to spread the gospel. Mark has a sister whose details are unknown. He is an American national by birth, a Thai by registration, weighs 68 kg, and is 5 feet 7 inches (1.70 m) tall.

When Mark was five years old, they relocated from the USA and moved to Albertville, France, where he started schooling.

Shortly, his parents decided to move to Tandala village of Congo, Africa, where they settled for 3.5 years. While in Congo, Mark Wein was homeschooled. He loved African food as he learned to hunt birds and eat them.

After war broke out in Congo, his family moved to Nairobi, Kenya, in 1996, and Mark attended an International Christian school (Rosslyn Academy) for eight years.

Immediately after completing his high school studies, Mark Wein migrated to the USA for further studies. He matriculated as an undergraduate at Arizona State University and graduated in 2008 with a bachelor’s degree in Global Studies.

Throughout his university time, Mark worked full time as an entrepreneur selling merchandise on e-Bay.

Mark Wiens is a successful YouTube personality, a vlogger, and an author. Food ‘turns him on.’

Mark loves to travel and explore different types of foods. These two likings were a result of traveling around the world with his parents.

With enough money (because he was working) after completing the university, Mark Wiens decided to travel to South America.

Because it was not a business trip but a jaunt, Mark knew that this would make his pockets dry as it involved cashing out. He decided to go for a Teaching English to Speakers of Other Languages (TESOL) certificate to make a living overseas when life gets tough.

“About a month after graduating, I went to South America – Buenos Aires, Argentina, to be specific. My goal was not to just travel and party, but instead, I wanted to learn, eat, and just see what it was like to live there.

I decided to take a TESOL course to learn to teach English – I thought if I can teach English somewhere in the world, it can be a way for me to live overseas and earn money.” He said.

After a few months, Mark traveled back to the US to attend his sister’s wedding.

It was at this time that he started a blog and a YouTube channel about his experiences in travel.

Mark Wiens started his blog and YouTube channel in 2009 while in the USA.

After a month, Mark Wiens moved out of the USA with a friend, Dwight Turner, to Bangkok, Thailand, where they explored more varieties and food and uploaded them on YouTube and blog – Migrationology.com.

“I traveled throughout Southeast Asia, both with a friend, and by myself, for the next 6 months, soaking in as much as I could, and loving every bite of food I could fit in my stomach – though food, I fell in love with Southeast Asia, blogging along the way – that is when I had internet – which I wasn’t as concerned about back then.” He narrated.

After a while, he was joined by a Kenyan friend named Joel. The two met in Bangkok and lived together but soon afterward, realized that they were running short of money and needed to look for a job.

“It was finally time for me to make use of my TESOL certificate I had gotten in Buenos Aires!

Teaching English was a great experience, and I’m really glad I did it… but I have to be honest and say that it just wasn’t for me. The Thai students and met and connected with were amazing, but I’m just not the type of guy that can sit in a classroom all day.”

After the end of his teaching contract, he decided to concentrate on making money online. He used money from teaching to travel and upload new and immensely creative content on his blog and vlog.

Since creating his YouTube channel (Mark Wiens) on Feb 2, 2009, he has accumulated over 8 million subscribers and atop 1 billion views count. 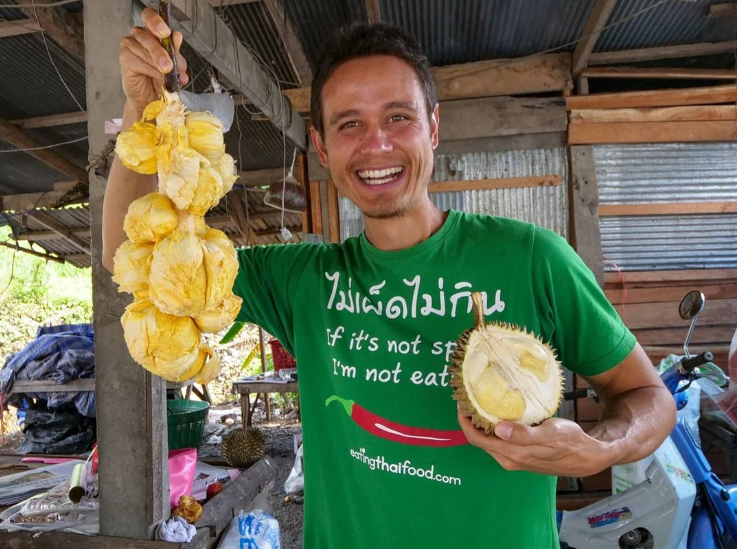 Mark Wiens is also an author of travel guides, such as 101 Things To Do In Bangkok, Eating Thai Food Guide, Vegetarian Thai Food Guide, and Delhi Travel Guide. He is a co-owner of a Thai restaurant with his wife.

Mark Wiens is a big deal in the travel and food industry. Both figuratively and literary.

The successes of his blogs, restaurant business, YouTube, and selling travel e-books and guides have made him boast a vast wealth.

Mark Wiens net worth is $7 million.

Mark Wiens is married to Ying, who originally hails from Thailand.

Mark met Ying when he was an English teacher. The two started dating after establishing that they have a deep connection and similar interests. Ying is a chef, avid traveler, and eater – just like Mark.

They tied the knot in 2016 in a simple wedding held at a Thai restaurant in Bangkok. This was after dating for almost two years.

“We got married at a restaurant in Bangkok, ate a feast of southern Thai food, and instead of having one of those beautiful giant wedding cakes, we had a beautiful giant durian,” Mark says.

Who is Mark Wiens child? Mark Wien and wife Ying are blessed with a son named Micah, born on November 12, 2016.

They currently live in Bangkok, Thailand.