Kenya’s top female rap star Stella Mwangi has been winning, that much we know.

Based all the way in Norway, STL has been repping the 254 to the fullest with her undeniable rap talent, and she has done it again.

Just months after she left an impression on American actor Dwayne The Rock Johnson, Stella Mwangi has now impressed US rapper Jay Rock.

The ‘WIN‘ rapper and Kenya’s very own Stella Mwangi met on Monday night in Norway where Jay Rock was performing for his Big Redemption Europen Tour.

Stella Mwangi, being a fan of Jay Rock, was at the concert, and as resourceful as we have always known her to be, she was able to get a one on one moment with the rapper and show him what a girl from Maragua, Murang’a County can do. 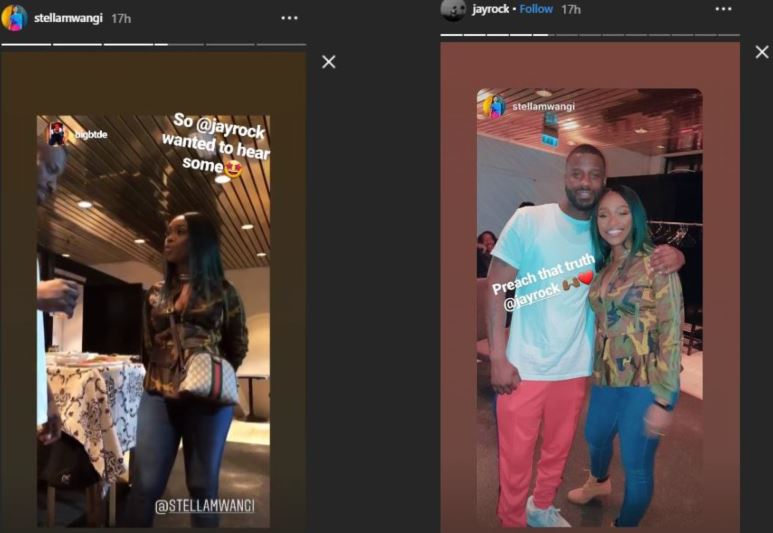 In a post on her Instagram Tuesday, Stella Mwangi shared a clip showing the moment she dropped some freestyle bars with Jay Rock keenly listening.

Stella tagged Jay Rock in the post and wrote: “Thanks for inspiring me last night❤ #AfricaStandUP we bout to hit em with the drums.”

Jay Rock has since started following STL on Instagram, and we can only hope it is the beginning of a possible collaboration between the two. Perhaps even a collabo with Kendrick Lamar, who knows?

Watch Stella Mwangi freestyle for Jay Rock below. Scroll through for the full footage.

Tatuu Songbird Angie says no to Pressure to Get Married in Comeback Song alongside Nameless, Big Pin < Previous
‘Super CS’ Fred Matiang’i Gets Down to Work, Chairs First Cabinet Meeting – PHOTOS Next >
Recommended stories you may like: