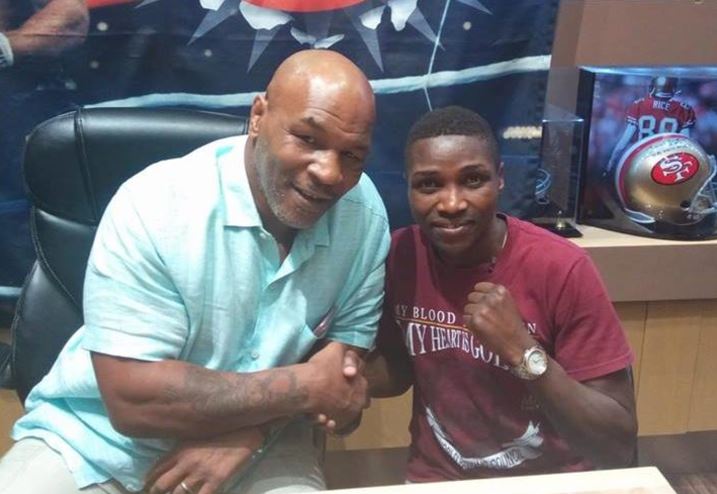 Last week, comedian Vincent Muasya better known as Chipukeezy met his comedy idol Kevin Hart and this week another Kenyan has had a dream come true.

Kenya’s Super Bantamweight Women Champion Fatuma Zarika had an opportunity of a lifetime when she got a rare surprise visit from legendary American boxer Mike Tyson at Berry’s Boxing Gym in Las Vegas.

The visit was part of her preparations before the much anticipated WBC Bantamweight title defense, and who better to draw inspiration from than the boxer once famously known as the ‘baddest man on earth.’

Speaking about meeting with her role model, Zarika said:

“It is always great to have a change of environment and that’s how I came to meet Tyson. “I was more than pleased to have met Tyson, one of the celebrated boxers in the game’s history whom I have only been watching on television. We had a lengthy talk, but he promised to visit me in the gym this week before the fight. It was really motivating and I am looking forward to meeting him again.’’

Fatuma Zarika, Kenya’s most decorated female boxer, is scheduled to defend her title against Jamaica’s Alicia Ashley on June 30 at a yet to be confirmed venue in Dallas, Texas, USA.

The bout will be a repeat of last year’s clash that saw Zarika go into the history books as the first Kenyan pugilist to claim the prestigious title after dethroning the Jamaican via a split decision at the Dort Federal Event Center in Flint in Michigan, the US.

The 31-year-old mother of two has been in the Las Vegas on a six-week long training, with betting firm Sportpesa sponsoring her logistics ahead of the highly anticipated bout.

Loading...
From a Subaru to a Range! Check Out Khaligraph Jones’ New Ride < Previous
VIDEO: Watch Pierra Makena Strut her Curves on Live TV to Slam Fat-Shaming Magazine Next >
Recommended stories you may like: