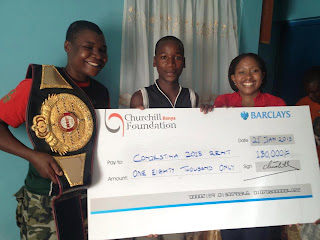 Comedian Daniel Ndambuki best known as Churchill, has finally paid up Congestina’s one year rent. The comedian had last year pledged to pay Conje’s one year rent, after her condition was highlighted on TV.

The boxer was suffering from a mental condition, made worse by unpleasant living conditions. She was living with her sister in Lucky Summer Estate, Nairobi, with their rent a meager Sh 2000 a month. Kenyans of goodwill contributed to Conje’s kitty, among them media personalities, businessmen and Prime Minister’s wife Ida Odinga.
Conje was taken to hospital and she is now well on her way to complete recovery. Some time towards the end of last year however, a campaign started on social media by controversial blogger Robert Alai, to compel Churchill to honour his pledge caught fire. The comedian responded and promised to pay up immediately.
Conje had since shifted to a better house with a sh 18,000 monthly rent. Churchill, through his foundation Churchill Kenya Foundation, yesterday presented the boxer a cheque of Sh 180,000.
© nairobiwire.com