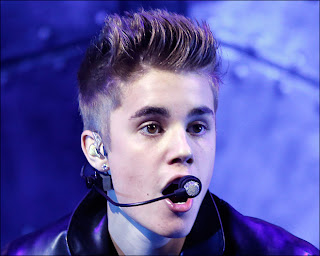 In a perfect world, our most popular Twitterer might be a brilliant scientist, writer, philosopher or spiritual leader.

In this world, he is an 18-year-old pop star with famous hair.
On Monday night, Justin Bieber surpassed fellow singer Lady Gaga to become the most-followed person on Twitter. As of Tuesday morning, The Biebs had more than 33,333,000 followers, while Gaga was closing in on 33,329,000. Both numbers continued to creep up, but it appeared Bieber was gradually increasing his lead.
Neither had immediately acknowledged the milestone on Twitter. Gaga’s latest tweet was a message to fans about her concert Monday night in Hollywood, California, while Bieber’s was a plug for a recent Teen Vogue photo shoot.
Based on their respective rates of growth, Bieber and his hordes of Beliebers were projected to overtake Gaga on Sunday afternoon, according to Twitter Counter, but Gaga’s Little Monsters put up a fight.
The coiffed Canadian crooner is Twitter’s first new king or queen since Gaga dethroned Britney Spears in August 2010. But Gaga still has more fans on Facebook — almost 55 million, compared to Bieber’s 50,666,000. (Rihanna tops both with 65 million.)
Twitter’s top 10 users (seven of them are singers):
1. Justin Bieber — 33.333 million
2. Lady Gaga — 33.329 million
3. Katy Perry — 31.4 million
4. Rihanna — 27.9 million
5. Barack Obama — 26.1 million
6. Britney Spears — 23.3 million
7. Taylor Swift — 23.1 million
8. YouTube — 22.2 million
9. Shakira — 19.3 million
10. Kim Kardashian — 17.2 million
CNN
Citizen TV Commissions Ipsos And Infotrak Poll. And Raila Is Leading In Both < Previous
7 Tips On How to Kiss a Guy For The First Time Next >
Recommended stories you may like: