Daddy Owen To Give Denno Sh 1 Million Of Award Money

“if i win the 2m i gv Denno 1m n the other 1m goes to #mbonaCampaign.” Daddy Owen 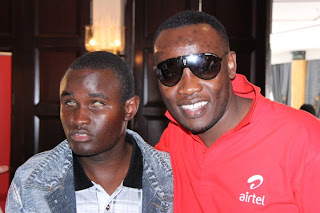 Minutes after declining to accept his nomination to the Kisima Awards, award winning gospel artiste Daddy Owen was bombarded by messages from his fans. He then decided to put their sentiments into consideration following what he termed as a ‘hasty decision’.
On his Facebook page, he wrote, “To my fans! 1st i need to apologize 4 bng hasty abt kisima awards nominations, i reacted without seeking advice from u, wats ua tek, shud i withdrw my nominations?”
Most of those commenting felt that he should not withdraw, with the most liked comment reading, “If you and Denno have been nominated, let Denno get the feeling and inspiration that comes with winning a big award.”
Following the overwhelming response, Daddy Owen decided not withdraw his nominations but to donate the money, should he win. Out of the Sh 2 million at stake, he promised to give Denno, the guy featured in ‘Mbona’, Sh 1 million with the rest going to charity.
He wrote, “Verdict frm my fans! If i win the awards i gv to Denno n dedicate them to #mbonaCampaign, if i win the 2m i gv Denno 1m n the other 1m goes to #mbonaCampaign.”
Daddy Owen has received five nominations in this year’s Kisima Music Awards for his song ‘Mbona’, featuring Denno.
© nairobiwire.com
Balotelli Wants Payment For ‘Why Always Me’ Shirts < Previous
Prof Ongeri: Stop Calling Us Mpigs Next >
Recommended stories you may like: