Ongeri Attacks Robert Alai And Anyone Calling Them Mpigs 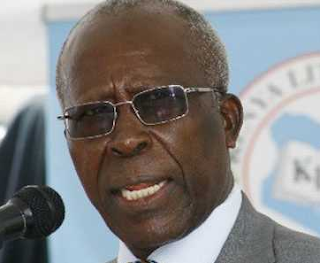 Last week, Foreign Affairs minister Sam Ongeri joined Twitter. He has quickly found his way around and is already ruffling shoulders here and there.
In just a few days of being on the second most popular social network, Ongeri’s account is promising to be an action filled one. He has already taken on some of the biggest names in Kenya’s social media scene and he is not mincing his words.
Yesterday, his target was Robert Alai. The blogger had tweeted that Uhuru Kenyatta is sending people to buy ‘loyalty’ in Kisumu. This was his tweet

“Listening to confessions on how Uhuru through Onyango Oloo is buying loyality in Kisumu.”

TNA has been regularly sending agents to pay bills of patrons in bars/pubs like Tummies and Signature.”>>so true!!

Prof Ongeri was not having any of that. He immediately responded to those allegations with this tweet.

“Funny enough that we wan’t unity in kenya but some bloggers spreading propaganda that a presidential candidate is buying loyalty , Very bad  “

On Friday, the minister expressed his dislike for the name Mpig, a name given to Members of Parliament by the Kenyan Online Community, to signify their love for heavy ‘eating’ of public resources. The word is an acronym for MP and PIG. Ongeri stated that it is unfair for Kenyans to refer to their elected leaders by such a horrible name. This was his tweet.

#KOT I still insist Its unfair to call leaders Mpigs ! Leaders and Citizens must relate well to have a peaceful nation ,happy sabbath

The minister is less than a week old at Twitter and has already received welcome messages from among others, British Foreign Secretary William Hague, who wrote “A warm welcome to Twitter for Kenya’s Foreign Minister @ProfOngeri“
However some of his tweeting tendencies have not gone down well with some people. Journalist Larry Madowo has a problem with Ongeri’s way of tweeting and he has a sneaking suspicion that the minister is not doing it himself. This was his tweet earlier yesterday.

The fact that @ProfOngeri starts most of his tweets with #KOT should tell you that some clueless intern is advising him, or tweeting for him

© nairobiwire.com
Daddy Owen To Give Denno Sh 1 Million Of Award Money < Previous
Kenya’s Highest Earning Entertainers Next >
Recommended stories you may like: