Balotelli Wants Payment For ‘Why Always Me’ Shirts 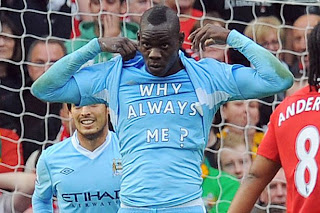 Soccer bad boy Mario Balotelli asked for cash from sportswear giant Umbro after the firm started selling replicas of his famous “Why Always Me” T-shirt.

The Manchester City star wore it under his strip after fireworks went off in the bathroom of his house the night before his team played archrivals Man United.

He pulled up his shirt to show it to fans after scoring in the game last October – but was furious when he learned Umbro was selling copies. The Italian then got City kit man Les Chapman to ask the firm for commission – believing he had rights to the words on the shirt.

Les said: “Mario had asked me what he could put under his shirt for the match. I said you can’t have anything about the fireworks or anything having a go at United. After about 10 minutes he said, ‘Why Always Me?’. Brilliant. And the next thing we know Umbro have started selling them.

“Mario asked me to call them about commission but they said nobody owns words.” Despite the snub, the player later worked with Umbro to publicise the T-shirt designed by rapper Tinchy Stryder with all profits going to charity.

A spokesman for Manchester City declined to comment. An Umbro spokesman said they could find no record of a call about commission.