Bishop Kosgei Might Be Fighting It Out With Gideon Moi 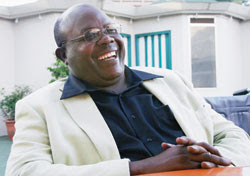 Gospel artiste, Emmy Kosgei’s father, Jackson Kosgei, has joined the race for the Baringo County senator setting the stage for a potential battle with retired president Moi’s son Gideon Moi. Bishop Kosgei of the Worldwide Gospel Churches of Kenya is reported to have met members of the clergy last week, to come up with a winning formula.
“Delegations of people from the expansive Baringo area have been coming to my house, urging me to vie for the post, and after consultations, I have decided to heed the people’s call.” he told the Nation.
Kosgei appeared as one of Ruto’s witnesses at the Hague during the confirmation hearings. The publicity he received may have motivated him to seek an elective post as is custom with Kenyans. In the last few years, Kenya’s men of the cloth have increasingly taken up politics. The best and most successful example has been bishop Margaret Wanjiru, who has won the Starehe parliamentary seat twice in less than 5 years. Pastor Pius Muiru, of Maximum Miracle Centre, is on the other hand a perfect example why religious leaders should stick to their day job. His performance in the last election is nothing to write about.
© nairobiwire.com
Apostle James Maina Ng’ang’a’s Glorious Wedding < Previous
NTV News Anchor Carjacked Next >
Recommended stories you may like: