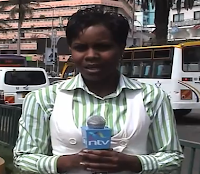 NTV news anchor, Jane Ngoiri is reported to have been carjacked on Friday night at South C neighbourhood. The journalist was in the company of her boyfriend, and were driving in a Toyota Vitz.
According to The Jackal News, the carjackers were armed with guns but no one got hurt during the ordeal. The former K24 reporter and her boyfriend, reported the chilling incident to the police, and collected abstracts. The energy saving car has not been found yet.
© nairobiwire.com
Emmy Kosgei’s Father Joins Politics < Previous
Minister’s Son Stabs His Lesbian Girlfriend At USIU After Shocking Revelations Next >
Recommended stories you may like: