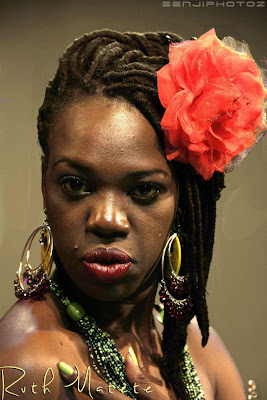 Kenya’s Ruth Matete was on Sunday night named the winner of Tusker Project Fame 5. Going to the weekend, Kenya had 3 contestants in the last 5. Steve was however eliminated on Saturday, leaving fellow Kenyans Ruth and Doreen, among Rwanda’s Jackson and Burundi’s Joe.
Come sunday, Joe was announced as the contestant with the least number of votes, leaving the two Kenyans and Jackon. None of the three was a clear favourite and the vote could have gone any way. Ruth was however considered by many as the probable winner given her consistency. Doreen on the other hand was said to have a whole army of University of Nairobi students backing her up with thousands of votes. Jackson was also a very strong contender given his constant impressive performances.
There however had to be a winner and the public had already voted. Number 3 went to Jackson, and he was clearly disappointed. His perfomance on Sunday was the best or a close second after Ruth’s, going by the audience reaction and the judges’ comments. Judge Ian had even proclaimed Jackson as one of his two favourites TPF contestants.
So the winner had to be a Kenyan, for the second time since the inception of Tusker Project Fame. And the winner was Ruth. Deservedly, she walked away with Sh 5 million and a recording contract from Universal, plus a one year bodyguard service from G4S.
Opinion was divided on social media as to whether the Ruth or Jackson deserved to win it. However many were in unison that Jackson deserved at least the number 2 slot. Despite Doreen having some brilliant moments, she was less consistent than the Rwandese.
Were it TPF 4, Jackson would have probably won it given his overflowing talent. He was just unlucky to be in the same competition with an equally if not more talented singer. Simply put, he was in the right competition, at the wrong time.
© nairobiwire.com
Esther Wahome Is New Mrs Universe Kenya. < Previous
Raila Joins Team Prezzo Next >
Recommended stories you may like: