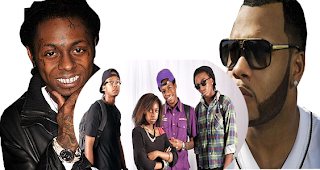 BET nominations surely gave Camp Mulla recognition, going by latest revelations that beats from their first single, ‘Party Don’t Stop’ have been used by two great rappers. In a new collabo between Flo Rida and Lil Wayne released this month, Camp Mulla’s beats feature heavily though twisted and covered up to avoid direct copy paste. It is however clear, especially at the beginning that those are ‘Party Don’t Stop’ signature beats.
The new track titled ‘Let it Roll’ was uploaded this month on YouTube and has already received thousands of views. The use of an artiste’s beats is a commercial affair. Safaricom has been using the same ‘Party Dont Stop’ beats on their 3g internet commercial and it is believed that Camp Mulla have been remunerated quite well. If Camp Mulla will be interested in following up with Flo Rida and Lil Wayne, and it is proved that they in fact used their beats without permission, the Kenyans could end up receiving some good compensation.
Here are the two songs side by side. Pay particular attention to the first few seconds of each song.
If your browser does not display the videos, follow This link for Camp Mulla’s ‘Party Don’t Stop’ and This link for Flo Rida ft Lil Wayne’s ‘Let It Roll’.
© nairobiwire.com
Jicho Pevu’s Mohammed Ali Letter To KTN. < Previous
" I Have No Oil Deal With Raila", Museveni Tells Miguna. Next >
Recommended stories you may like: