" I Have No Oil Deal With Raila", Museveni Tells Miguna.

Uganda Denies Having Any Plans Of Refining Its Oil In Kenya. 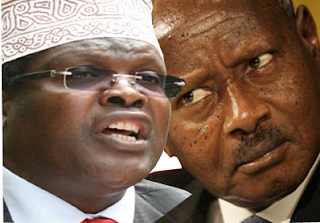 The Ugandan government has denied allegations that President Museveni and some powerful individuals around him negotiated secret oil deals with Prime Minister Raila Odinga over construction of an oil refinery.

The claim that Mr Museveni could have discussed the possibility of building the refinery in Kenya rather than Uganda in his meeting with Mr Odinga is contained in a new book, ‘Peeling Back the Mask’ by Mr Miguna Miguna, a former aide to the Kenyan prime minister.

According to Miguna, Raila and Museveni agreed that instead of Uganda building a refinery in Hoima, its oil would be transported to Mombasa in its crude form, for refining and export. Ms Irene Muloni, Uganda’s Minister for Energy, said that Miguna Miguna probably does not wish Uganda well.
“President Museveni is at the forefront of building a refinery in Uganda. Already, land has been secured to build the refinery, which will help Uganda add value to its oil, and, thus, earn us good income from value-added oil,” she added.


Mr Odinga made a sudden trip to Uganda and met Mr Museveni at State House Entebbe, around mid-2009. During the visit, Mr Odinga and President Museveni purportedly decided to work together in order to process and sell the oil currently being produced from Lake Albert in Uganda through Kenya. Miguna in his new book says: “Now obviously many people would say that Raila was only doing this for the economic good of Kenya. That’s possible. Why, for example, was the Ministry of Energy not involved in the discussions?”
Since the meeting in question, Kenya has discovered oil, raising the question of whether Uganda would go ahead with its own refinery or work with Kenya to expand the old refinery at Mombasa.

Uganda’s ministry of energy has however insisted that Uganda will go ahead with the refinery project despite what happens in Kenya’s oil sector.

Miguna Miguna severed ties with Odinga under acrimonious circumstances but it is not clear what his motivations for writing are.
Mr Miguna also claims that Mr Caroli Omondi, Mr Odinga’s Private Secretary, worked with either Mr Sam Kutesa or Eriya Kategeya, who have family and historical ties respectively with President Museveni, to fix the appointment with the President.
However, Mr Sam Kutesa denied the allegations, saying: “That is absolute nonsense. I have never linked the two. I think the two know each other enough. And even if I had done so, I see no problem as long as Kenya invested in Uganda’s refinery.”