Kenya’s Big Brother evictee, Alex, has been the target of attack ever since he nominated Prezzo for eviction, not once but twice. One time was enough to make him Kenya’s eternal villain, but he made it worse by putting the rapper on the chopping board for the second time. Whatever his game plan was, if he had any, backfired massive. He was evicted with no vote. His brother Malonza fared better by getting one vote. Prezzo on the other hand got 5.
The mood in the house might have deceived him that Prezzo was an easy target. With Prezzo being on the bad side of almost all housemates, Alex might have thought that the ‘president’ was also not loved by Africa. In that he saw an opportunity to get rid of the person preventing him from getting the Kenyan vote. Alternatively, he may have thought that Africa, with the exception of Kenya, would have seen him as a hero who did not shy from eliminating his ‘hated’ countryman. Maybe he thought that he did not need Kenya’s vote after all. Brilliant plan on paper, but stupid when you come to think of it.
Alex case may be similar to that of Kaz and Didge, but worse because as the saying goes, only fools learn from their mistakes. And for that Kenyans were first to celebrate his eviction. Celebrities were not left behind. Nonini, Shaffie Weru, Kalekye Mumo among others took to their social media accounts to express their happiness. Here are some of the tweets. 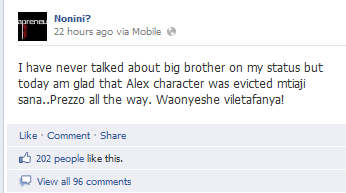