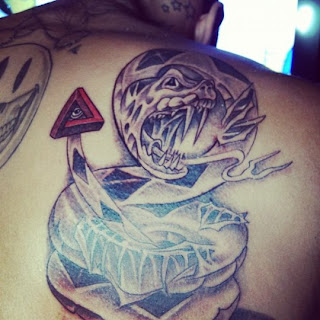 If you thought he was Illuminati, then this is not going to convince you otherwise. Chris Brown has got himself a new tattoo. It has been said to be in reference to the Chinese Zodiac. That however, does not help its scary nature. Chris says his tattoo signifies his birth year, 1989, which is the year of the snake according to the Chinese Zodiac.
While posting it on his Instagram account, Chris put the caption, “The impossible triangle: year of the snake!!!!!!”
The ‘impossible triangle’ refers to the triangle attached to the tail of the snake with the all seeing eye in the middle.The triangle and the all seeing eye are signs used greatly by the illuminati and thats probably the reason why Chris Brown’s latest tattoo has generated much interest.
Just recently, another artist, Lil Wayne, allegedly got a 666 tattoo under the disguise of 999.
© nairobiwire.com
Dimitar Berbatov Wants To Leave Manchester United. < Previous
Prezzo Survives Another Big Brother Eviction Scare. Next >
Recommended stories you may like: