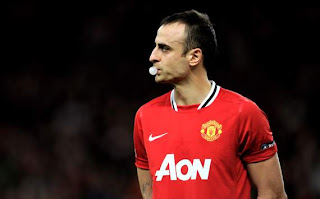 Manchester United striker Dimitar Berbatov has finally acknowledged that his time is at Old Trafford is up. Berbatov has increasingly been disappointed with the very irregular playing time he gets. Ever since the arrival of Javier Hernandez and later Danny Welbeck, Berbatov has been overlooked by Ferguson. In 2011, the Bulgarian was surprisingly left out of the Champions League final against Barcelona, despite being the top scorer in the Premier League that season.
Berbatov took his frustration to Facebook when he wrote,

“The truth is, I love this club, but I am not going to be useful to anyone, if I am not playing, And I want to play, I want to help. But for unknown reasons its not going to happen, or my chances will be limited, so it’s better for everyone if we say goodbye. If not, I am professional and I will keep doing everything I can, to help my team and my teammates, whenever I have opportunity to do so.”

There has however been some disagreements over his transfer price. Media reports have come up with figures incoherent with what Berbatov says he has been told by Ferguson. He wrote, “Because I am tired of speculation,I am telling you this. I read the papers and I see they say 10 million pounds is my price, I go and talk with Sir Alex, and he says to me 5 million…So who is telling the truth, what do you think??”
© nairobiwire.com
15 Robbers Ambush A Nairobi Church And Sweep Everything. (VIDEO) < Previous
Chris Brown Snake Tattoo Sparks Illuminati Controversy. Next >
Recommended stories you may like: