By Ken   /   Wednesday, 20 Jun 2012 10:22AM   /   Leave a Comment
She promised to be famous before the end of Tusker Project Fame and she meant it. Juliet Karanja, the girl who was denied entry into project fame on the last audition, despite popular belief that she is an amazing singer, won the Coca cola Olympic Anthem Contest. Juliet, remembered for her exaggerated make up, was chosen together with Collins Okoth out of 12 finalists. The winners were chosen by the public through sms voting. Coca cola Olympic Anthem Contest auditions were being aired on NTV’s ‘The Beat’.
“I think Kenya has made a good choice with Juliet and Collins,” said Madtraxx who is producing the track. “I look forward to the magic we will be able to produce in studio in the coming weeks. It’s my hope the fans will continue to give us their input on Facebook and Twitter so that we can collectively make a real Kenyan Olympic anthem,” he added
The Olympic song will be recorded this week with the video shoot next week. The competition has been running the whole of this month where more than 300 people auditioned in Nairobi, Mombasa and Kisumu. The judges chose twelve finalists and the public chose the two winners. The Coca cola Olympic theme song will be released next month.
If you missed the story of Juliet Karanja, READ IT HERE. 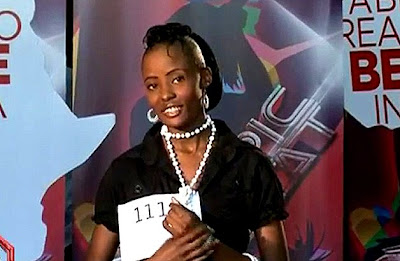