The Guards Went To Take Pictures After Hours. 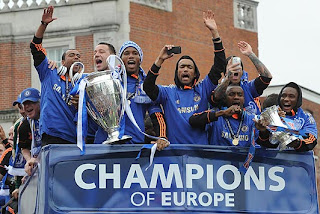 Three security guards at Chelsea have been suspended after they sneaked into the clubs cabinet after hours to take pictures with the club’s latest addition, The UEFA champions league trophy. The following day, a colleague noticed a handle hanging and the alarm was raised.
Chelsea then sent the silverware, which was itself a replica of the real cup, to a London silversmith for emergency repairs. The club’s chief executive Ron Gourlay, confirmed that the visit by the guards was unauthorized and investigations have been launched. It is believed that Chelsea had not locked up the cup and has been passing it round Stamford Bridge in recognition of the staff’s hard work.
Asked about the incident, a club spokesman said: “The trophy was accidentally damaged while pictures were being taken.
“It was minor damage and has already been repaired. We don’t make comment on staff matters.”
© nairobiwire.com
Embu Family Gets Very High After Eating Marijuana for Supper. < Previous
TPF Reject, Juliet Karanja, Wins Coca Cola Olympic Anthem Contest. Next >
Recommended stories you may like: