(CANADIANS FOR KENYANS) His aim is to raise Ksh 64 million to contribute in feeding some hunger stricken Kenyans. 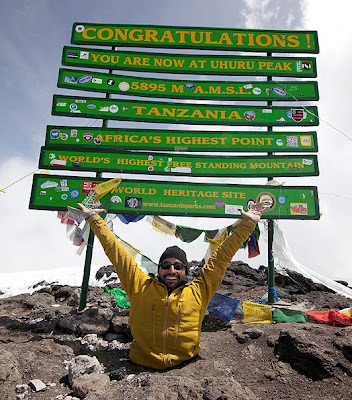 A legless man climbed the highest peak of Mt Kilimanjaro in 7 days. Spencer West, 31, underwent a double amputation at the age of 5 after being born with a genetic disorder. He trained for a year before setting off for the mission dubbed ‘Redefine Possible’ with two friends.
Half of those who attempt to climb the Kilimanjaro do not make it and virtually 100% have legs. (Chelsea owner, Roman Abramovich is part of the statistics that did not make it to the top)
“The moment the summit was within sight was incredible. The summit sign seemed almost like a mirage.
“We looked around and realized that, after seven grueling days of relentless climbing, after 20,000 feet of our blood, sweat, tears and vomit we had actually made it.
“The bleeding fingers and blisters were all worth it.”said Spencer.
The Canadian used his wheelchair for only 20% of the climb and his hands the rest of the time. In his early years, doctors told Spencer that he would never be a functioning member of society owing to his disability but he is not one to stop at anything.
“I set out to climb Mt. Kilimanjaro not only to redefine what’s possible for me, but to inspire others to overcome obstacles and challenges of their own, and to give back to communities, that need our help.
“Reaching the peak of Mt. Kilimanjaro was the most mentally and physically challenging thing I have ever done, but in doing so, it reinforced the powerful message behind believing in yourself, and believing in others.
“So many people made this journey possible for me and I am so humbled by everyone’s support.” He said.
His mission is to raise $750,000 for the charity organization Free the Children’s sustainable water initiatives in Kenya. So far, over $300,000 has been raised.
© nairobiwire.com
TPF Reject, Juliet Karanja, Wins Coca Cola Olympic Anthem Contest. < Previous
Who Is This Ugandan Diva Driving A Lamborghini? Next >
Recommended stories you may like: