After Stealing Furi Furi From DK, Jimmy Gait Fails To Win Artist of The Year at Groove Awards.

Still on The Groove Awards… 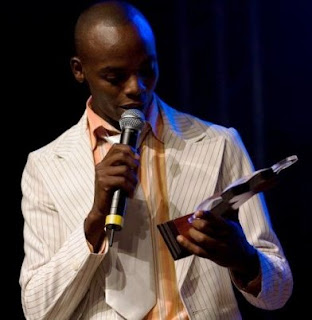 It is widely believed that Jimmy Gait stole all the credit for the massive hit Furi Furi, which he did not even compose. Up coming artist, DK, in an interview with Pulse sometime this year, said that he invited Jimmy Gait to be part of his project, having already composed the song and done most of the parts. Jimmy Gait loved it and they started ‘working together’, or so DK thought. The huratiti singer, rushed and registered the hit with Safaricom’s skiza and mobile sawa, knowing clearly the thousands artists makes from these phone services. DK was not featured anywhere in the registration.
Jimmy Gait went ahead to become the face of Furi Furi, and even made a remix. Few Kenyans even know that there is a DK in the song. The few who know probably think its Jimmy Gait featuring DK, instead of vice versa. Of the few who know that, fewer will even point out DK from a crowd of three.
Furi Furi Dance, is probably the biggest gospel hit of the year and most probably the reason why Jimmy Gait got nominated for the male artist of the year at the Groove awards. The hit song even went ahead and won the song of the year. Without under emphasizing Jimmy Gait’s input to the song, its fair to say, he stole all the credit. For some reason however, despite being the clear favourite to win artist of the year, he did not.
Here is part of DK’s interview with Pulse magazine.
Pulse: It appears there is a dispute between you and Jimmy Gait over the Furi Furi song?
DK: Jimmy knows the idea was mine and he was only a consultant. At the time I needed a breakthrough as an upcoming artiste and felt that working with an established musician like him would catapult me into the limelight.
Pulse: What happened then?
DK: I approached him last year with the idea of Furi Furi song and dance. I invited him to come over in order to have a feel of the demo song, which he definitely loved judging by his reaction. He even went ahead and assured me it was a good song and that if done well it would go places. At this point I was confident that things would work for better having found a trusted friend and an advisor. But little did I know that the one person I trusted and looked up to would later turn round and stab me in the back.

Pulse: Stabbed in the back?
DK: He went ahead and registered the song with Skiza under his name without my knowledge. When I asked him why he decided not to credit me on this considering it was my idea and composition all he said was that it was no big deal considering he had registered with Skiza earlier and that we would share the monies accrued. This did not go down well with me. I felt betrayed since I had relied on him to help me out with After Stealing Furi Furi From DK, Jimmy Gait my idea.
© nairobiwire.com
Musalia’s Kibisu Kabatesi VS Raila’s Barrack Muluka < Previous
Mudavadi Goes To UDF, For Automatic Presidential Candidature. Next >
Recommended stories you may like: