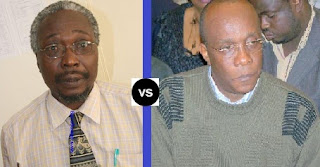 Forget the bitter fight for the ODM presidential nomination between party leader Raila Odinga and his deputy, Musalia Mudavadi. There is another intense battle going on in the background, and the combatants prefer bare-knuckles. As things stand now, Raila nearly has the prize, the ODM ticket to vie for the presidency in the coming General Election in the bag, with Musalia having made it clear to all and sundry that he will be leaving the Orange party. But the other war is far from over.

The war in the background is being fought between the men who look after the images of the two leading politicians. The combatants are the communication experts of the two close allies-turned-enemies. In the red corner is Dr Kibisu Kabatesi, the fire-spitting aide of Musalia Mudavadi, and in the blue corner, Barrack Muluka, who only recently joined Raila’s campaign secretariat as the communications chief.
Both communication experts know each other quite well. They were both in the Bachelor of Arts class of 1979- 1983 at the University of Nairobi. Kibisu believes Muluka was his classmate, but the latter is quick to point out that he never shared any class on campus with the former. While Muluka has always had political ambitions, Kabatesi is in politics by virtue of his connection with Musalia, who has been a close associate since college. In 2007, Muluka sought the ODM nomination to vie for the Khwisero parliamentary seat, and he still believes to this day that Mudavadi locked him out, paving the way for the not-so-colourful Evans Akula.
And this is the genesis of the fight between Muluka and Kabatesi. Some time last year, Muluka wrote a newspaper article that was critical of Mudavadi, and Kabatesi fired a response, accusing his nemesis of sour grapes. He claimed that during the ODM nominations, he found Muluka huddled in a corner in Mudavadi’s Mululu home in Sabatia, Vihiga County, hoping to reach the deputy ODM leader. And that he, Kabatesi, felt really sorry for the man as he never got to see Mudavadi, and hence his bitterness. He said his former classmate was bitter with Mudavadi for no helping him to win the nomination.
In response, Muluka said Kabatesi was never a classmate of his and that the only time he knew the latter was when both worked at the KBC in the 1980s, during which a TV camera that was in Kabatesi’s custody, got lost, but in Muluka’s words, “was liberated”.

Amazing Parliament Chairs Made By The Prisons. < Previous
After Stealing Furi Furi From DK, Jimmy Gait Fails To Win Artist of The Year at Groove Awards. Next >
Recommended stories you may like: