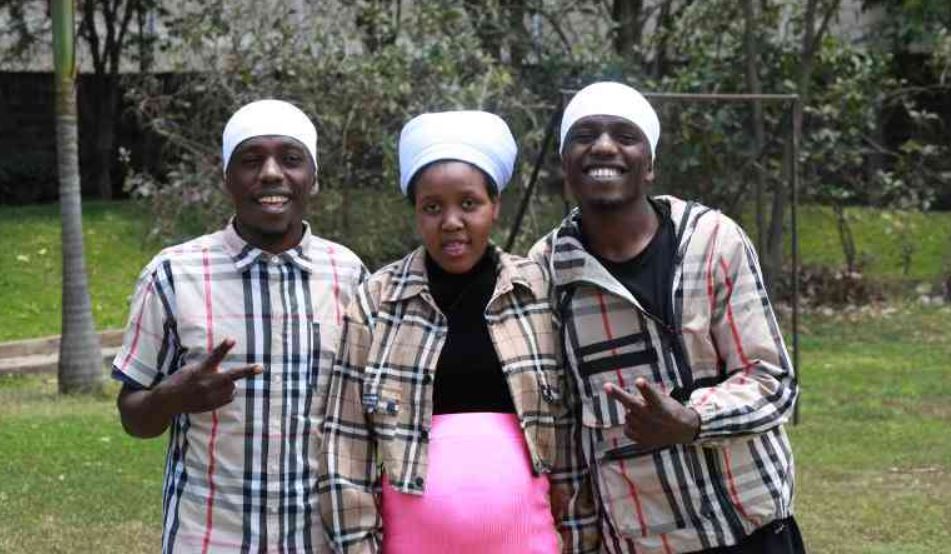 “I saw him at church and I knew he was the one,” says Emily Nyaruiru while describing how she met the first love of her life, Peter Macharia.

Nyaruiru and Macharia had attended an Akorino wedding; “He was composed, handsome, well dressed, dark, and I just liked how he talked,” she adds.

It was love at first sight for Macharia too, who says: “When I saw her, I knew she was the one I wanted in my life.”

So how did Nyaruiru end up falling in love with Macharia, 24, and his twin brother, Teddy Kimathi?

Well, when Macharia attended the wedding, he was using Kimathi’s phone as his was faulty.

“A wedding is a big thing in our church, and I couldn’t fail to attend or appear without a phone. It is an opportunity to meet people and make friends because we come from across the country to attend, eat, dine, dance, and worship, during weddings,” Macharia explained in an interview with the Nairobian.

Macharia and Nyaruiru exchanged contacts and when he got back home, he returned the phone to his brother Kimathi.

They continued communicating through Kimathi’s phone as Macharia was embarrassed to tell his newfound flame that he did not have a phone.

After some time, Kimathi started picking up Nyaruiru’s calls and replying to her text messages without revealing his identity.

“He is my brother, and there was no problem. I remember that they even had numerous video calls, and she didn’t suspect anything,”  Macharia said, adding: “Remember, we have the same voice, the same looks, and we act the same way.”

After about three months of chatting, Nyaruriru finally agreed to go on a date with Macharia.

“I struggled to make her mine. I struggled to win her, and my brother helped because he was on the phone with her most of the time,” Macharia said.

After another three months, Kimathi talked Nyaruriru into another coffee date, with the 18-year-old believing it was a second date with Macharia.

Kimathi asked his twin brother if it was okay to go on the date and he agreed. He also asked Macharia to accompany him.

“I could not turn down my twin bro because we share everything,” said Macharia.

“We went dressed in similar attire from head to toe, sending her into shock because she could not pinpoint who it was between us that she had met at the wedding,” added Kimathi.

“So we told her, chagua mwenye unataka (pick the one you want).”

Apparently, this was not the first time the brothers from Molo had fallen in love with the same woman.

When asked to choose between them, Nyaruiru was spoilt for choice, and the rest as they say is history.

“The three of us have been one since. We share one bed in the same house in Umoja, Nairobi and I believe our parents are fine,” the teenager said.

On how she tells them apart, Nyaruiru says Macharia is stubborn while Kimathi is the cool guy in the relationship.

However, Nyaruiru can’t tell who between the two impregnated her.

Nyaruiru said the three are hustlers and out of employment, and plan to have more children.

Badi: Running Nairobi Was Tougher Than Sierra Leone Peacekeeping Mission < Previous
Zari’s Brutal Massage To Those Who Say Her Relationship is Doomed Next >
Recommended stories you may like: