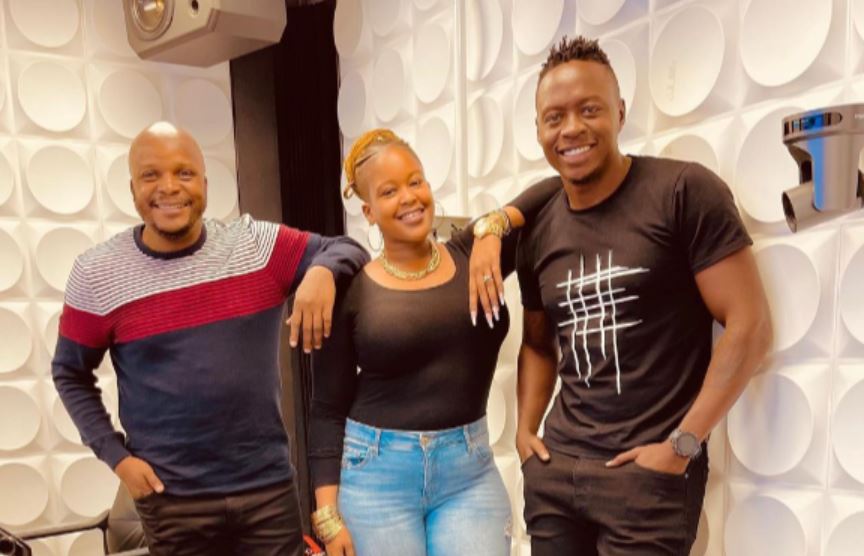 Kiss FM presenter Oga Obinna was on tenterhooks as the results for the Lang’ata Parliamentary race started streaming in earlier this week.

Despite being confident that his close buddy Jalang’o would win the seat, Obinna was thrown off balance after “Twitter Returning Officers” started mocking Jalang’o.

Preliminary results had put the former Kiss FM presenter on the losing side, prompting ridicule from a section of Kenyans on Twitter.

Obinna admitted he was anxious and could not sleep as he would have to relinquish his job to its former holder.

“I knew he’d win, but you know yesterday when those people were doing those things on Twitter I couldn’t even sleep, my stomach was turning.

“In the morning I went to work, I was telling Kamene I don’t know where to place my head…” Obinna said before joking that he had a go-bag packed and ready in case Jalas lost and returned to Kiss FM.

Obinna praised Jalang’o as a born leader as he accompanied him to the tallying center in Lang’ata.

“I’m here to support my brother, help him pick that certificate you know that win will be a heavy one…. we take him directly to Langata sasa he starts doing his job, he is a born leader,” Obinna said.

The comedian at the same time disclosed he had plans to run for MCA but shelved his plans as he had other priorities.

Obinna however noted Jalas had set a precedence for him to run for the Lang’ata MP in the future.

“By the way, weirdly enough most of the things that Jalas has done, I end up doing them. Even going to Kiss, I went round and eventually ended up where he was.

The funnyman also spoke about his recent social media tiff with Eric Omondi.

all I did is say a few truths here and there, wicks that he needs to change but before that I had never spoken bad about him.

“We just talked about him on radio about Eric did this and this then we laughed and it was nothing major, he even commented then later I wake up and I find us trending and I’m like who is pregnant? Then I was like oohh it’s Eric, then I saw him there shouting and I was like… okay cool.

Nelson Havi’s Message To Twitter Trolls After Losing Westlands MP Race < Previous
How Ronald Karauri Responded after his Gold Chain was Stolen on the Campaign Trail Next >
Recommended stories you may like: