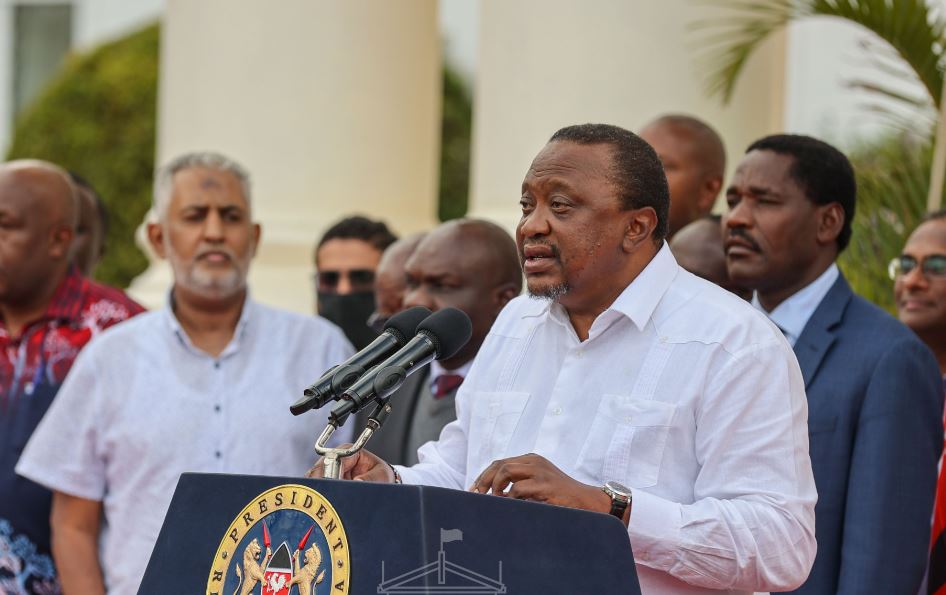 For the last four years, our Nation and the Horn of Africa Region at large, have experienced unexpected low rainfall, resulting in drought, poor harvests and crop failure in some parts of the country.

This situation has been compounded by other preceding disasters, including a desert locust invasion in 2019, the effects of COVID-19 pandemic in 2020 and 2021, and the disruptions in the global supply chain of food and farm inputs, following the Ukraine-Russian War.

As a result, the number of vulnerable households in Kenya has increased tremendously, and the cost of basic food items has risen beyond the reach of many families.

Faced with such a challenge, the moment requires us to act swiftly and decisively to cushion the vulnerable, as we figure out sustainable means of dealing with the emerging trend. And this is what we did when the COVID pandemic ravaged our country beginning in March 2020.

Today, and borrowing from our experience in managing previous challenges, I want to squarely address the question of cost of living.

And in doing so, I want to focus on the ethical behavior practised by the three key entities that have a duty of care for the people of this Republic. First is the corporate citizens and their social ethical practice – entities like maize millers; second is the political class and the civic duty required of them; and third is the Government and the social responsibility it is required to practice.

I will address the three key elements of civic responsibility as relates to the question of the price of Unga specifically.

Let me begin by stating a pattern I have observed in our country. Every election in this country has attracted ‘Unga Crisis’. In fact, there seems to be an engineered connection between elections and the high prices of unga. There is an obvious trend between the manner the price of unga goes up and the tempo taken by the election. Why do I say so?

In July 2012, months before the March 2013 election, the price of a packet of 2 Kilogrammes of Unga shot up from Ksh.70 to Ksh.130. When my administration came to office, we had to intervene to bring down this price as an urgent priority.

In May 2017, three months to the August 2017 election, the price of unga shot up to an unprecedented high of Ksh.189. This is the highest price experienced between independence and 2017. And this crisis was used as the fuel that powered the ambitions of certain members of the political class.

Today, months to the August 2022 election, the price of unga has shot up again. It has moved from a price that is affordable of Ksh 100 to Ksh 205. So the national question we must pose from this trend is this: Is it a coincidence that we have ‘Unga Crisis’ just before every election? Is this the result of a market dynamic or is it a deliberate outcome? This question must be posed and put to rest.

And in posing this question, I will return to the three entities charged with the duty of care for the people of this Republic with respect to the price of unga and its curious relationship with every election.

Let me begin with the maize millers. Like every citizen of this Republic, they have rights and responsibilities as corporate citizens. They must enjoy their market rights to make profits, but they must also exercise a corresponding social responsibility to the people of this Republic. Even whereas the increase in price is also affected by drought and other external factors, their motivation for profits must be tempered by a reasoned level of social ethics.

I say so because the making of profits and ethical corporate citizenship are not conflicting ideals. They are in fact complementary. You can make profits and exercise responsible business practices, all at the same time. More so because, if unethical practices result in instability during elections, the biggest loser is not the ordinary citizen. It is the corporate citizen and their investments that suffer.

And because the government cannot legislate a culture of corporate responsibility and that we cannot police the social ethics of corporate citizens, I implore them to see their role as a partnership with the people and their government.

This is true of some large scale commodity houses and maize traders, maize millers and fuel handlers, who use the practice of hoarding to control prices. Yet in the end, if hoarding results in increase in prices to unaffordable level and consequent instability, the damage is highest on the corporate citizens. 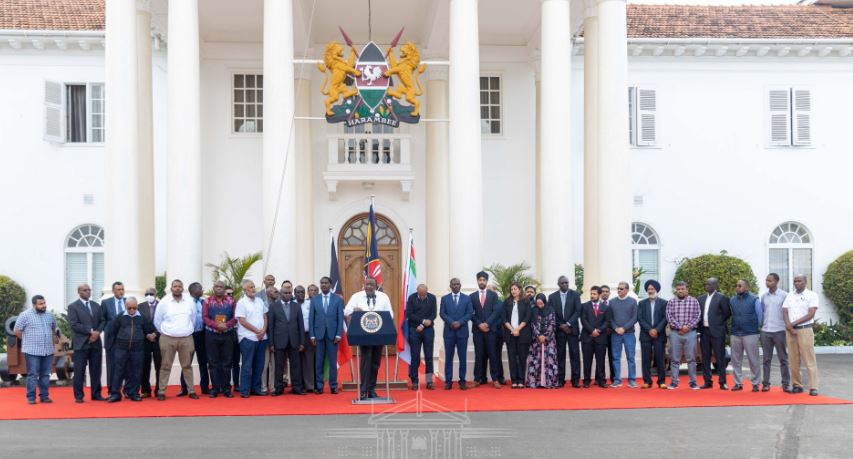 If it is not a coincidence that every election attracts high prices of unga, then we must question the coincidence?

And I say so because if one of them acts unethically by hoarding their products, the other benefits by politicizing this irresponsibility. But in the meantime, who suffers from this mischief? If the politician gets his votes out of it and the miller gets their profit, what does the common mwananchi get? And in the end, who carries the burden of this mischief? The common mwananchi, of course!

If my appeal to the millers is to practice a reasoned level of social ethics, my appeal to the political class is to exercise civic responsibility. To politicize the pain of the vulnerable without offering solutions, is to mock the lifestyle of the same voters the politicians are appealing to.

The partnership between the corporate citizen and the political class must benefit the people of our Republic. And if it breeds misery like the high price of maize every election, then the voter has a duty to put an end to it.

Finally, the government, the world over is meant to be a community of solution-givers. And our mandate as the Fourth Administration of this Republic is to offer solutions to the needs of those who elected us and to cushion them whenever unexpected problems degenerate into a crisis.

The record is clear that my Administration has done this relentlessly, with or without elections. And this is because our mantra in the fog of a crisis is to always view the crisis as a ‘danger’ and an ‘opportunity’. We have cushioned our people from the ‘danger’, but pointed them to the underlying ‘opportunity’.

The First Stimulus Package lowered various tax regimes, lowered the Central Bank Rate (CBR) to 7.25% from 8.25% so as to prompt commercial banks to lower interest rates applicable to their borrowers, and thereby availing the much-needed affordable credit to Micro, Small and Medium Enterprises (MSMEs) across the country.

To support this, we also lowered the Cash Reserve Ratio (CRR) and thus unlocked cash amounting to Ksh.35 Billion to commercial banks. This stimulus package put Ksh.176 Billion back into the pockets of Kenyans.

Additionally, we temporarily suspended the listing with Credit Reference Bureaus (CRB) of any person, Micro, Small and Medium Enterprises (MSMES) and corporate entities whose loan account had fallen overdue or was in arrears.

The Second Stimulus Package, whose tenet was the 8-Point Programme, revitalized the productive sectors by Ksh.56.6 Billion. One of the celebrated initiatives of this package was “Kazi Mtaani”, which was meant to cushion our young people from COVID-related unemployment.

The Programme has so far secured gainful engagement to over 1,000,000 youths, deployed in infrastructure improvements and in public hygiene and created opportunities for young people to start new businesses.

Having secured significant progress in the containment of COVID-19, in October 2021 I announced the Third Economic Stimulus Package that was positioned to shift our focus from surviving COVID-19’s socio-economic vagaries to building back better.

The Ksh.25 Billion stimulus package was designed to accelerate the pace of our economic growth and sustain the gains already made. The Third Economic Stimulus Package pushed the aggregate of our stimuli to over Ksh.257 Billion.

No other country in our Region or even continent implemented such a broad and robust economic response to COVID-19 and the need to turn tragedy into opportunities. The outcome of these interventions are manifest and vivid for all to see – a historic tax collection of Ksh.2 Trillion in FY 2021/22.

The Fourth Stimulus Package focused on subsidies. The first one is the petroleum subsidy. To offer relief to household budgets, we have over the last year granted and maintained a fuel subsidy programme amounting to Ksh.118 Billion.

Without this state intervention, the pump prices would have been Ksh.193.64 for diesel, Ksh.209.95 for petrol and Ksh.181.13 for Kerosene in Nairobi, and higher further inland. In fact, we have set the pace in the Region for provision of fuel subsidy to cushion our citizens.

The second set of subsidies aimed at bolstering food production. My Administration announced a Ksh.5 Billion fertilizer subsidy programme, which has reduced the cost of fertilizer from Ksh.6,000.00 to an average of Ksh. 2,800.00.

And to build on this momentum, as well as cushion our population from the rising cost of living, my Administration has pondered a Fifth Stimulus Programme, focusing primarily on the ‘Unga Crisis’.

In line with our financing and budgeting framework, in the month of July, we commenced a new Financial Year. This gave us an opportunity to review our priorities and better re-align our expenditure framework to respond to emerging needs.

I note with regret that the cost of a 2 kg pack of maize-meal remains out of reach for many, as it is currently retailing at an average of Ksh.205. As a consequence of this continued escalation in food prices, I today announce Fiscal Measures focused on food Subsidy, as our Fifth Stimulus Programme covering the supply and distribution of our nation’s staple food – maize meal, across the entire country.

My Administration has engaged all milling companies registered by Agricultural and Food Authority (AFA), and issued a Legal Notice under the hand of the Cabinet Secretary for the National Treasury. Through this notice, and effective immediately:

This programme of a subsidy of Ksh.105 per 2kg pack of maize meal is meant to lower the cost of living for the vulnerable households as we look for a sustainable solution to the recurrent rising price of unga every election.

Allow me to conclude by re-emphasizing the need for both corporate citizens and the political class, to exercise high civic responsibility. And to this end, I invite them to join the community of solution-givers.

God Bless You all, and God Bless the Republic of Kenya.

Infotrak Responds After Deleting Twitter Poll Showing Gachagua Ahead of Karua < Previous
Obama Moment..? Son of Kenyan Father Favourite To Become Next UK Prime Minister Next >
Recommended stories you may like: