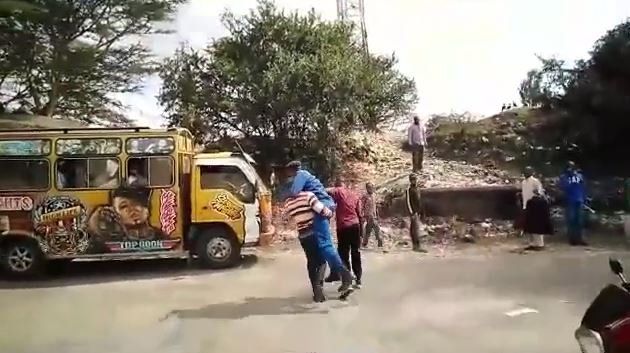 A police officer who was filmed in an apparent drunken stupor in Buruburu, Nairobi has reportedly taken his own life.

Constable Harrison Mugo was captured in a video staggering while armed and dressed in police uniform. The video went viral on Wednesday, with the National Police Service(NPS) saying it had instituted disciplinary actions against the officer.

“The National Police Service condemns it in the strongest terms possible. A uniformed police officer is a visible representation and face of government and is required to remain extremely disciplined and professional while on duty and off duty,” said NPS.

“The Buruburu Police command has taken corrective measures for the situation, and the matter is being handled internally.”

On Thursday morning, however, Constable Mugo was found dead at the police canteen.

A groundsman at the Buruburu police station reported that he found Constable Mugo hanging inside an old police canteen that got burnt down a few years ago.

“It was reported by Mr Salim Onteri a grounds man at Buruburu police line that he woke up at 6am for his normal duties near the police canteen when he spotted the deceased hanging on rafters of the burnt police canteen within the police station lines,” a police report read.

“The body had no visible physical injuries and no suicide note was found. The deceased officer was the one whose clip went viral yesterday (Wednesday) after he was filmed being drunk and disorderly while in police uniform and disciplinary action had been taken against him.”