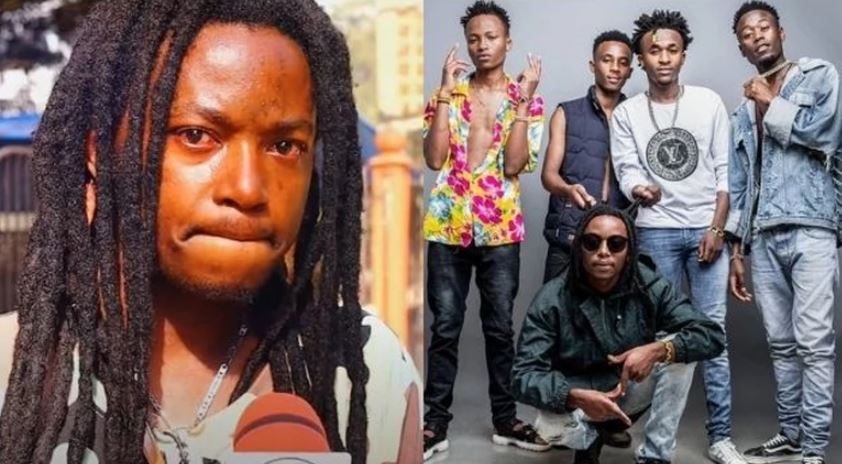 Sailors Gang group member Qoqos Juma shed tears as he explained why the once sensational Gengetone group faded into oblivion.

Speaking to the Plug TV, Qoqos Juma said life has been difficult for him and Sailors Gang since they joined the music industry. From their fallout with former manager Mwalimu Rachel to their new record label, Qoqos said it has not been a walk in the park.

Loosely translated: (Life has been difficult since I joined the music industry. Things have not been easy, you try to come up as an artiste but you are pulled down by the management and record labels)

The rapper was overwhelmed with emotions as he blamed the record label that signed most Gengetone artistes for their downfall.

“At the moment we are working individually because of the label, they don’t want us as a team. All these Gengetone artistes have been brought down by the record labels and I will not shy away from speaking the truth,” Juma said.

The musician said the only thing they ever got after being signed under a record label were mobile phones.

“The only benefit is this phone and even this we got it from a Company that had already approached us,” he added.

Juma also noted Mwalimu Rachel was a good manager but faulted her for refusing to give out their YouTube Channel when they parted ways.

He said they have since reconciled with the NRG radio presenter and they are now on talking terms.

“Kenya artistes suffer a lot because the government doesn’t even care about them. We still hang out together but unfortunately we can’t release music as a group,” Juma said.

I was on Family Planning When I Got Pregnant, says Jackie Matubia < Previous
Two Form Four Students Arrested For Assaulting Teacher Next >
Recommended stories you may like: