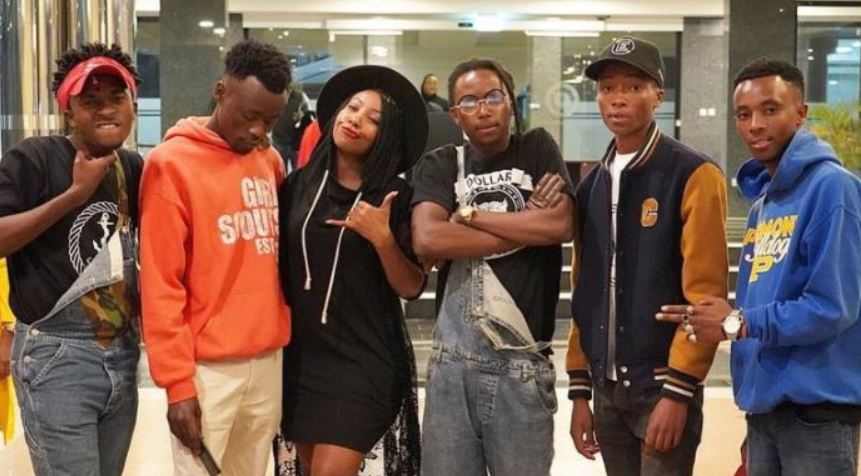 Radio personality Rachel Muthoni Njeru popularly known as Mwalimu Rachel is once again on the spot over her alleged role in the downfall of promising Gengetone hitmakers Sailors Gang.

The NRG radio presenter came under fire from internet users on Thursday after Sailors gang member Peter Miracle Baby took to social media to rant about the group’s situation.

In his post, Miracle Baby addressed the people who have been asking about the group’s fall from grace.

The hitmaker said he was fed up with such questions, saying no one spoke up when they were robbed of their music, YouTube account, and endorsement deals. 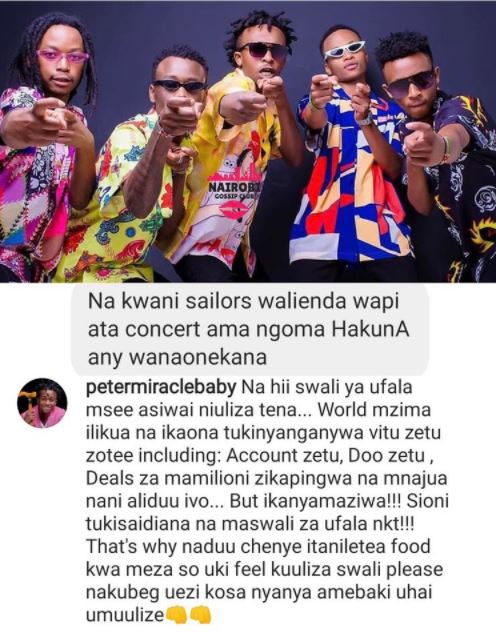 This saw Mwalimu Rachel become a trending topic on Twitter for the better part of yesterday. The media personality previously managed Sailors Gang under her company MRX Media before they fell out unceremoniously.

Rachel claimed Sailors went behind her back and signed with another record label, Black Market Records’ (BMR).

The label approached Rachel with a Sh100k offer for the YouTube channel but she demanded Sh1.5 million, citing Return On investment(ROI).

Here’s what Kenyans on Twitter had to say about this whole debacle.

Sailors were already on their bag bro they could have cut things with Mwalimu Rachel if they felt like she was taking advantage of them. They did that to themselves.

This issue between Sailors 254 and Mwalimu Rachel reminds of Otile Brown and Dreamland Music back in 2015 or 16, there about.

What time are we cancelling Mwalimu Rachel?

Only a fool will believe Mwalimu Rachel was responsible for the fall of sailors.Did she take away their talent?Does she produce music? I bet she can’t even write a song.Sailors caused their own downfall when their bit the hand that fed them .END OF STORY .

Mwalimu rachel forcefully inherited the YouTube channel sailors used for their music, now with 128k subscribers she has to struggle to hit 1K views pic.twitter.com/ShkBcn4GB4

Only a fool will believe Mwalimu Rachel was responsible for the fall of sailors.Did she take away their talent?Does she produce music? I bet she can’t even write a song.Sailors caused their own downfall when their bit the hand that fed them .END OF STORY .

I weep every time I see young artist suffer bcz poor guidance from friends around them, recently shanty flames from kibera changed her manger,2 years from now you will also blame her former manager when things don’t work out.Sailors apologize to Mwalimu Rachel.

Before crucifying Mwalimu Rachel I had to look at the other side of the story. I think Mwalimu rechael is right. Sailors gang need to pay her to get the logins.

😂😂 Sailors wanalia Ati Mwalimu Rachel messed them up…you left her option for another better option..milichagua kurush mkacrush, since hamwezi reverse mnapata what you https://t.co/BZmuAFG8Mf‘s gonna be okay if you learn the lesson.

Be very careful when signing a contract. Go through the document, read thoroughly and understand every word written on it, Coz it might come back to haunt you. Can’t really say who’s at fault between Mwalimu Rachel and Sailors. I always like to listen to both sides of the story.

Y’all made Mwalimu Rachel your soft target and punching bag. How can one girl bring down four men? Those boys should prove themselves again under new management like any gifted artist should. Prove yourself over and over again.

Seems Mwalimu Rachel took everything plus their voices and strategy

Mwalimu Rachel in her new Benz as Sailors cry on social media 😭 pic.twitter.com/XaV35GGl0S

Sailors are young stupid boys, and Mwalimu Rachel is a woman born in matriarchy. What happened was natural to both. Mjinga alichanuliwa na mumamaz akakalia wazee.

Mwalimu Rachel was on a business spree with Sailors, next time be Keen on the contracts that you sign, find legal interpreters to guide.

Huddah Cuts off Friends Who Ask for Freebies, “Keep your Struggles to yourself!” < Previous
Bishop Kiuna Can’t Keep Calm After Appearing on ‘Nganya’ Next >
Recommended stories you may like: