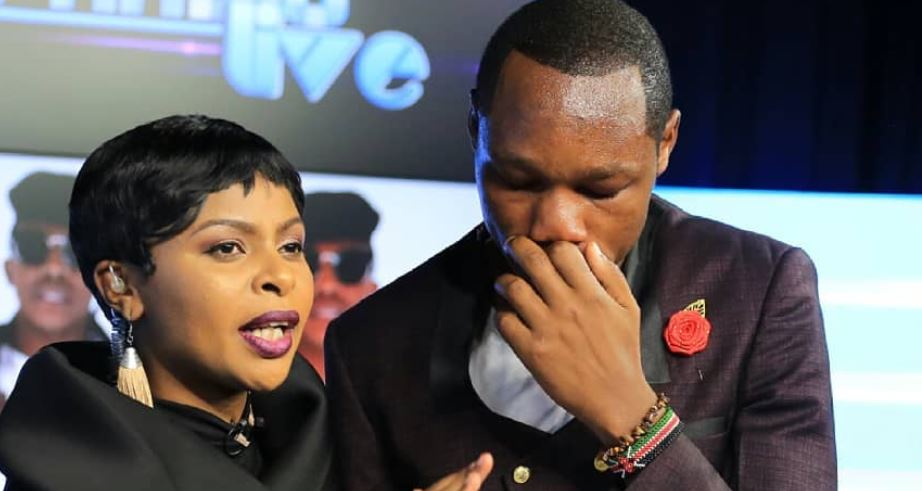 Sky Davin, who has overcome a lot of obstacles to get to where he is, part-time receptionist at an insurance firm. He spoke to OneXtra about his journey.

What’s your background like?
I was raised in Mathare 4A, as the second-born in a family of five children. We were raised by a single dad after my mother ran away from home when I was 12 and our last born was just a year old. She just went to her rural home and we heard months later that she had gotten married to someone else.

Did you ever confirm that she was married?

In 2017, my father got very ill and he was hospitalised. She came to visit him at the hospital. Unfortunately, my dad passed away and we had to come together as a family. We have other siblings through her and her other husband. I’m still working on relating with her as my mother.

Why is it so hard?

Forgiveness takes time. But her abandoning of us had also affected how my brothers and I viewed women as untrustworthy and cold. It also gave us self-esteem issues and I developed ulcers. However, my pastor and other church leaders have been walking with me for a long time and showing me that not all women are like that, and also that forgiveness is actually good for me.

When did you get into music?
I started when I was in Class Three. Together with two friends, we’d perform English and Swahili poems as rap music at school competitions and events. In 2005, I went to Thika Road Primary School and went on to form Christ Unit (C Unit) with about 20 people: rappers, dancers and hypers. I wrote my first rap song “Raha”, which talked about what a joy it is to know Jesus.

We performed the song during Programme of Pastoral Instruction and students and teachers loved it. We became the school’s celebrities. They nicknamed me Professa Jay because of my love for grammatical Swahili. In 2007, our school won the national Chill Club programme talent cup, and our group was one of our school’s performances at the event.

Eko Dydda heard about us, we were then distributing cards to help us fund the recording of our album, and he would give us rap coaching since he was also from Mathare area. We would do it at a place we had rented to do our rehearsals. I changed my style from Bongo to almost Eko Dydda’s.

How did you end up in your church’s choir?
In 2008, I went to a show at Nairobi National Museum and met a producer called Oscar Nyamgero. I had just done my KCPE. He told me that he can take me to City of Light which used to rent space at the same place. I got saved and then told them that I was a performer.

They gave me a platform and I performed a rap version of Michael W. Smith’s “Awesome God” and they liked it. Then I joined the choir.

What was the craziest thing you’ve done for your music?

C Unit broke up when we went different ways for high school. I worked at a construction site when I wasn’t even old enough to work. I wanted to earn money to record at a studio. My neighbour would hook me up with light work and I’d earn Sh250 a day. When I had made Sh5, 000 I went and recorded a song at 4Play records. I didn’t like the end product so I still have the track with me. (Laughs)

Why stick to gospel music this long?
I have been taken care of by people from the church. My fees were paid by some people who my father didn’t even know. And at one point, because my ulcers were discovered at a progressed stage, they even paid for my surgery and medication thereafter in 2012. I have only known love from the gospel industry. When Size 8 was launching my song “Nowe” on Pambio Live, she was dancing and singing, because I’m honest when I sing about God and what he has done in my life. I wasn’t what many would consider the brightest prospect in C Unit, but I’m here which means God meant this for me.

Are you under a label?

In 2014, I met Dickens while I was recording “Keeping It Real”. He was looking to set up a studio and I recommended to him where he could get constructors and booth materials from. Amazingly, he had me look over that project and, after its completion, made me the manager of the studio DIMAX Entertainment. I had only expected that he would sign me under his label. The studio produced Willy Paul’s “Digiri” audio and Sanaipei Tande’s “Ankula Huu” video. That’s where I still am.

What challenges do you face as an up and coming artiste?
I have almost four albums theoretically speaking. Some songs are recorded, others in demo form and the rest as just lyrics. Financing the actualisation of these into final audio and video products is what keeps me and a lot of artistes from getting to the next level; it is expensive. My desire is to get to a point where I’m doing music full-time; that’s my passion. I recently started pursuing a diploma in public relations at Nairobi Institute of Business Studies with the money I’m getting from both jobs, because I had promised my father that I would get higher education.

What makes you most proud about doing music?

Having people appreciate my work and being able to take care of my younger siblings. My siblings from my mum’s other marriage are also very excited to see my videos on YouTube and even check out my interviews on television. I also developed my own sense of fashion which are suits that I designed. When people ask me where I get them from, that also makes me proud.

Mistony: Everything to Know About U.K-Based Kenyan Singer < Previous
Kush Tracey Opens Up on Finding Salvation, Regrets, Dating, and more Next >
Recommended stories you may like: