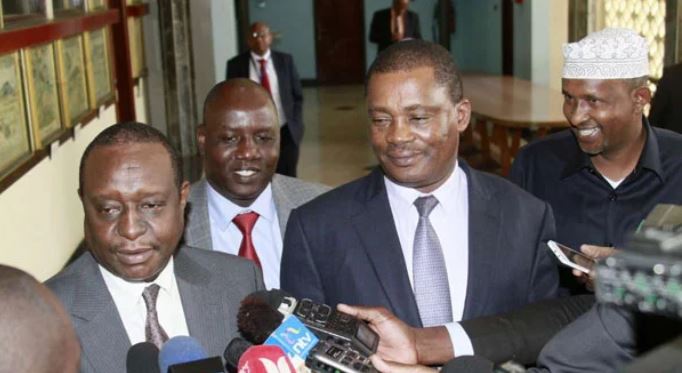 As Kenyans continue to sing the praises of the High Court in Bungoma County for issuing temporary orders stopping the new 16 percent Value Added Tax on petroleum products, Treasury CS Henry Rotich has said the government will soon find a solution to the impasse.

This is after the CS on Thursday held a two-hour closed-door meeting with the leadership of the National Assembly led by Speaker Justin Muturi, leader of majority Aden Duale, and Attorney General Paul Kihara.

Speaking to journalists, Speaker Muturi said the meeting was the first in a series of meetings that would be held in the coming days in a bid to find a solution to the controversial tax that has triggered a boycott by some oil marketers, resulting in fuel shortage across the country.

Without divulging more details, Muturi said that the increase of VAT on fuel products was top of the agenda.

“We just want to assure you that we will address the issue. This is just the first meeting and we will have many more,” said Muturi.

According to a source at the meeting, the leaders proposed to reduce the VAT on fuel products to 12 percent among a raft of changes to the finance bill. However, a decision was not reached as parties agreed to engage further.

Meanwhile, Justice Stephen Riech from Bungoma High Court issued the temporary orders on Thursday after a group of youths from the county sued the National Treasury Cabinet Secretary for effecting the new levy.

The case will be mentioned on September 12.

Governor Joho: I Want the Presidency < Previous
The Hottest Stories on the Internet Today (Monday September 10) Next >
Recommended stories you may like: