Nairobbery: Woman Wanted For Robbing Widows and Mourners During Funerals 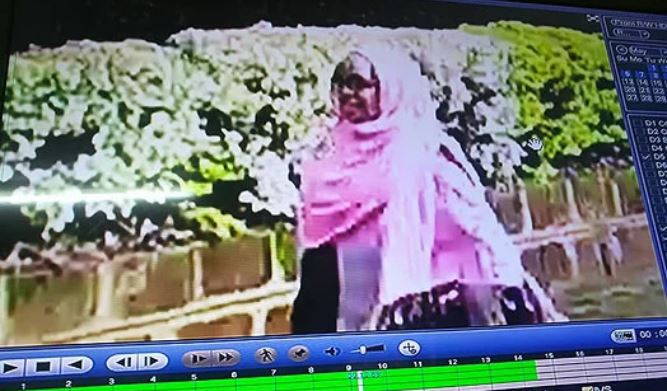 Kasarani Police are said to be looking for a woman who is accused of stealing from mourners during funerals in Nairobi.

According to reports, the yet to be identified woman disguises herself as a mourner before drugging unsuspecting victims and making away with their valuables.

The suspect’s most recent ‘heist’ is said to have occurred last week Thursday when she allegedly drugged a mourning widow and stole her phone.

The incident was shared on Facebook by Kevin Otiende who said the accused used the widow’s stolen phone to solicit money from her friends and relatives.

“The woman made her way into the residence of a friend who died earlier this week, where we were meeting for burial arrangements. We thought she’s a normal mourner, coming to condole with the family. She spent one hour talking to the widow, then she drugged her and took off with her phone.

“This morning(Friday, May 11) she called many people asking for money.”

According to Otiende, he fell for the con and sent Sh 7500 believing it was the widow.

Otiende further shared images of the suspect who was caught on CCTV cameras walking into the widow’s house in a blue scarf and leaving with a pink scarf stolen from the widow. 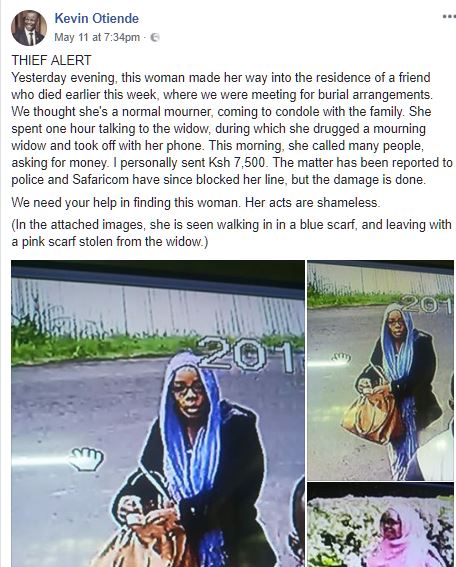 Coincidentally, several social media users identified the woman and accused her of similar robbery incidents, some dating as far back as May 2016.

Keru Wa Njenga narrated her ordeal saying, “Oh my God this lady did the same to me during my late husband’s matanga in May 2016. I hope she is caught. Oh Lord…the trauma she caused me. She went to my bedroom stole clothes and from my phone she managed to steal Sh20,000.”

Another Facebook user, Mary Opiyo, added: “Yes, she is very notorious, she robbed people in Lang’ata few months ago. She comes in camouflaged as mourner who gives a helping hand, doing chores and preparing tea hence gaining the trust of the mourners to a point of dispersing any suspicion. Then all phones go missing then you have no one to suspect.”

Another widow, Brenda Mweu, recounted having suffered at the hands of the same woman: “On April 24, when I was mourning my husband this woman came to my house and pretended to be a colleague to my late husband. She stole my phone and called people pretending it was me and asked for money…”

Monica Ngatia added: “This chick is still doing this, no noooooo, she did same to me when my sister passed on, 8 years ago. what name appeared on the mpesa?

Betty Kyallo Reveals The Kind of Guy She Wants to Kiss, Sends Fans Wild < Previous
Polycarp Igathe Lands Prime Corporate Job at Equity Bank Next >
Recommended stories you may like: