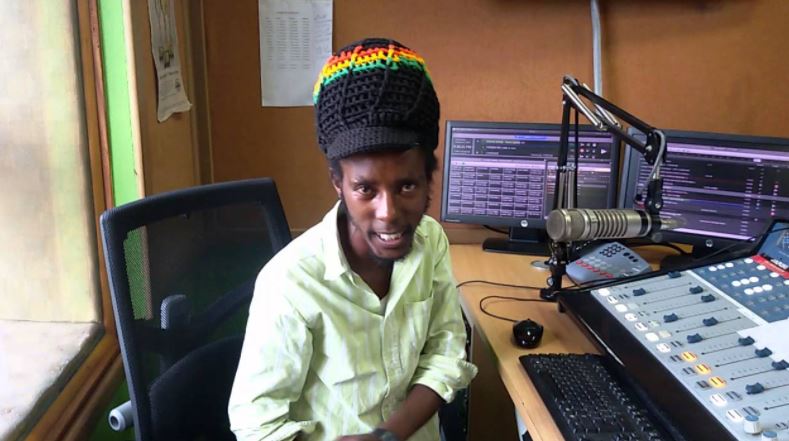 He is one of the most popular radio personalities in the country and is celebrated for his influence over the sheng’ speaking youth of the country.

Real name Daniel Githinji Mwangi, Mbusii is a prime example of a rags-to-riches story. Before the fame and popularity, Mbusii was a bhang peddler struggling to make ends meet.

He spoke to the Nairobian about his life at Korogocho slums.

You are a self-confessed former bhang peddler. How did you find yourself in this situation?

It was not by choice. I had a pregnant wife and a daughter to feed. My daughter had just joined school and I had to pay fees.

Rent for my mabati house also had to be paid. Sh1,500 rent is a lot of money when you don’t have a job and you are living in Korogocho slums.
Who were your clients and how did they know that you were a supplier?

I would hang around the Kenya National Theatre pretending to be an aspiring artist.  But I knew why I was there. Every time I sold a roll, I would plead with the client to refer me to his friends.

So how did you find yourself at Ghetto Radio?

One of the former presenters known as ‘Roba’ came to the theatre looking for comedians. He was referred to Githis (my nick name) but like Simon Peter from the Bible, I denied that I was the one; three times.

I thought he was a policeman and perhaps knew what I was up to. It was not until he came with recorders that I finally agreed to talk to him. He took me to Ghetto Radio and gave me a job as a messenger and traffic updates voice artiste. My salary was Sh3,000!

Was the salary enough for survival?

Not at all. That’s why I continued peddling bhang. Being a messenger and peddler was hectic and I had to employ someone to help me supply the drugs.

One roll was sold for Sh30 and for each roll that he sold, I gave him Sh10 commission. At the end of the month, I made close to Sh8,000, which was peanuts. My life was in a mess and I was an unhappy man.

What exactly was the problem?

I was always broke. Despite earning two ‘salaries,’ I couldn’t save anything. It is like my income was ‘cursed’. I remember this night when my wife went into labour.

I did not have money to pay for a taxi and begged the driver to take us to the hospital, promising to pay him later. Upon arrival at Pumwani, I was asked to pay Sh200 for admission, which I did not have.

I had to borrow the money from the taxi driver. I ended up owing him Sh1,000 in total. It took me a whole month to settle the debt. And there were other debts as well, yet everyone knew that I was working for a radio station.

I was never at peace and dreaded the day I would get arrested.

How did you avoid getting arrested?

I was very careful and avoided policemen. I was arrested a few times though and even spent a week in jail. That’s when I decided to recruit my wife.

Unfortunately, she got arrested on her first day. She was stopped by a policeman who demanded to search her handbag. She had to bribe her way out.

This was my wake-up call, particularly after she told me that she would rather die than spend her life behind bars.

Luckily, this was the same time that Maji Maji (Julius Owino) joined the station as manager. He loved the way I did traffic updates and asked me if I was interested in becoming a host.

It was a dream come true. That is how the reggae show ‘Goteana’ was born.

Did it change your lifestyle?

Of course! My salary was bumped to Sh20,000. I did not know what to do with all that money. I had to discuss and plan with my wife how to spend it every month, because this was like a million shillings.

The first thing we did was move out of the slum and relocate to Kariobangi South.

Did your clients still call you?

They did, but I was a changed man now. I was not doing it by choice. Some were very disappointed because I used to sell them high quality stuff.

But they are happy I quit and transformed, and they tell me as much whenever we meet.

OMG! Man Confesses to Killing Girlfriend for Allegedly Cheating on Him < Previous
Police Arrest Two Over Murder of Swiss Couple, Launch Manhunt for Prime Suspect Next >
Recommended stories you may like: