Duale: Raila is the Biggest Conman and Coup Plotter Who Never Fought for Freedom 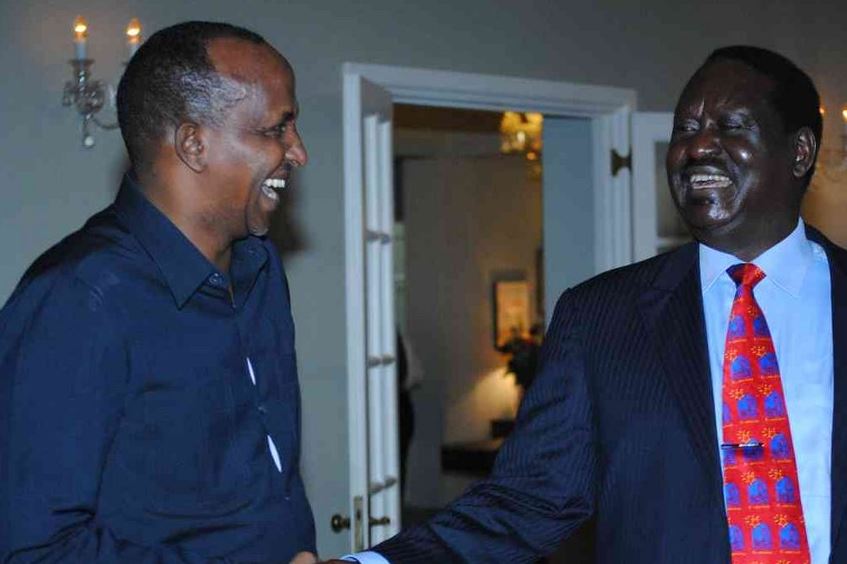 Among the biggest accusations Uhuru and Ruto have thrown at Raila, is that he is preparing to force a ‘nusu mkate’ government. Raila reversed this on them, stating categorically that he has no plans of sharing power with Uhuru.

Read his tweets below.

It was at this last tweet that Uhuru commented with a light touch. 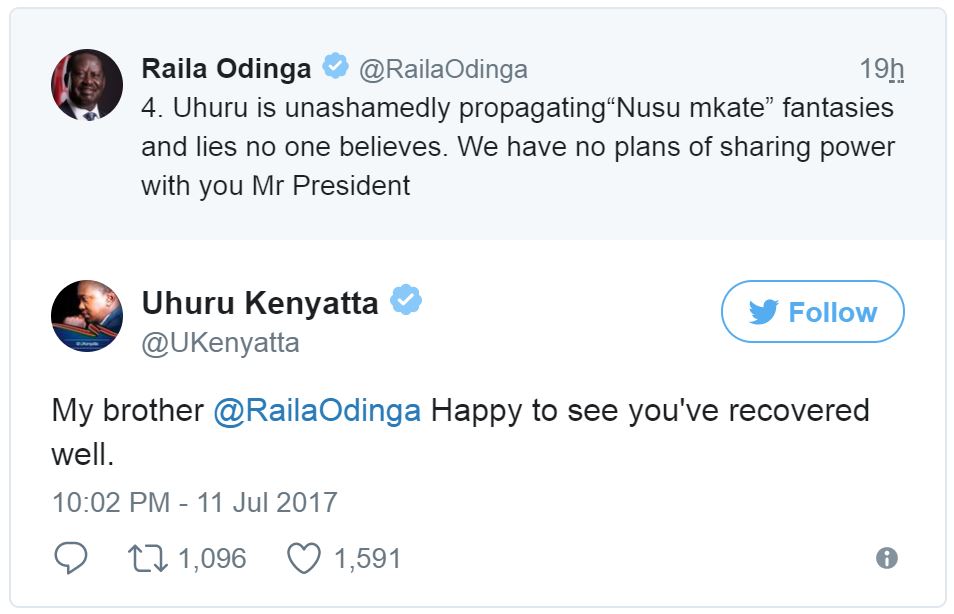 But moments after Raila’s tweets, Majority Leader Aden Duale took to his Facebook page to give Raila a piece of his mind. In a post titled ‘THE FATHER OF VIOLENCE HAS REACHED HIS END’, Duale accused Raila of being the ‘biggest conman masquerading as a reformist.’

He re-ignited the 1982 coup topic, saying Raila is a big ‘law breaker’. He also accused the opposition leader of being in bed with money launderers, extortionists, looters, racketeers and criminal elements.

THE FATHER OF VIOLENCE HAS REACHED HIS END

A liar asks to be judged only by what he says. An honest person is judged by what he says and what he does.
The father of lies and propaganda has sent yet another of his endless monologues to lament and lament and tell Kenyans nothing other than what his true intentions are.
Raila is trying to hold onto any straw now that it is becoming increasingly clear that the Jubilee Government will thrash him in the August Polls.
Odinga, likes to say that he fought for freedom. In 1982 when he participated in the coup against the government of Daniel arap Moi, he was fighting for freedom, he says.
When he joined Mwakenya in trying to overthrow Mr Moi, he was fighting for freedom, he says.
In the 1992 election when he supported his father’s quest to be President, he was fighting for freedom, he said. When he led his supporters to violence in 2007/08, he said he was fighting for freedom.
Odinga is a known coup plotter, a law breaker and the biggest conman masquerading as a reformist.
Odinga claims to be a reformer, a liberator and a leader by day, but at night consorts with money launderers, extortionists, looters, racketeers and criminal elements.
He should be prepared to accept defeat since he has failed to tell Kenyans that he will. We do not fear Odinga. We do not.
The endless cases blocking IEBC to perform its duty is clear as day that Odinga wants a Nusu Makate government.
Odinga has realized the number of Jubilee supporters is soaring, he has panicked and now he is looking for excuses anywhere and everywhere.
Jubilee is steadfast determined and is clear in its programmes and above all it is going to hand him another humiliating defeat in the coming elections.
As a perennial political loser he is all too familiar with the feeling. It is causing him to lose his mind. He is in a state of panic and delusion.
To deal with this familiar feeling Odinga is resorting to two of his favourite tactics: prepare for violence and lies.
We want to tell Odinga and some of the Nasa leaders that Kenyans will not allow them to cause violence.
Majority of Kenyans will not tolerate and entertain this. They cannot allow a power-hungry lot to destroy their motherland.
The main motive of the Odinga group is to muddy and discredit the elections in an attempt to negotiate a coalition Government. It will not happen.

Excitement as Uhuru Drinks a Whole Mug of ‘Jug Daniels’ (PHOTOS) < Previous
Public Likes Scam Continues To Lure in More Fools Next >
Recommended stories you may like: