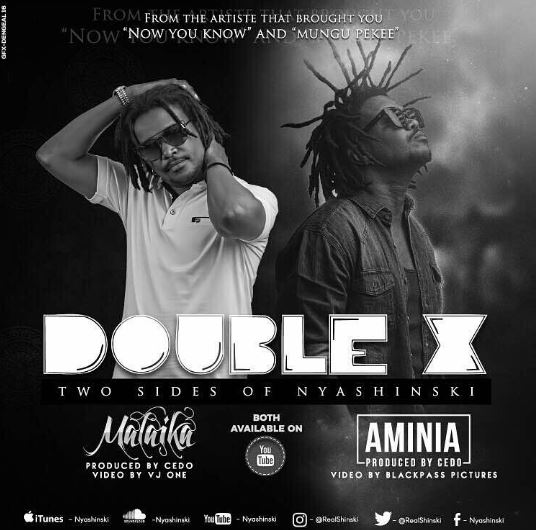 World Stop! Nyashinski is back with two new hits, because one is never enough I suppose.

The former Kleptomaniax member has been on a terrific roll since his comeback, consistently releasing hit after hit.

He first appeared on the party track ‘Letigo’ with Nameless, and before we know it, his first solo project ‘Now You Know’ had taken the country and East Africa by storm.

Then came the deep and moving ‘Mungu Pekee’ which has since clocked 2 million views on Youtube despite being a lyric video.

With fans wanting more of the singing rapper, Nyash has come through with two amazing new singles and videos.

The songs titled ‘Malaika’ and ‘Aminia’, bring out the two sides of Nyashinski. ‘Malaika’ is a mellow and beautiful love song while ‘Aminia’ is a bumpy rap track which reminds listeners of Nyashinski the Kleptomaniax rapper.

Both tracks have been produced by Cedo. Videos by VJ One (Malaika) and Black Pass Pictures (Aminia).

The King is Back! Chiwawa Marks Comeback with a Dope Banger ‘To the Left’ < Previous
Man Stabs Wife to Death After Catching her in the Act with a Neighbour Next >
Recommended stories you may like: