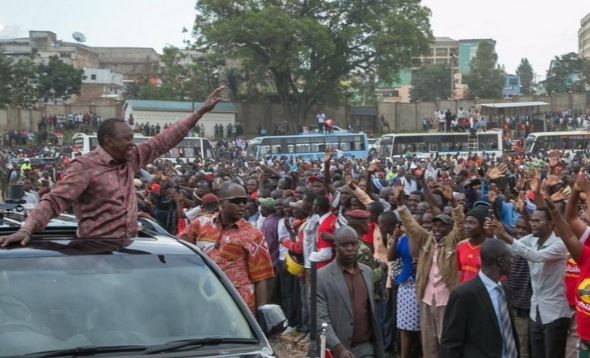 Kisii youths on Wednesday took to the streets in dramatic protests and chanted pro-NASA slogans during the President and DP’s tour of the county.

The protests were led by Kitutu Chache South ODM parliamentary aspirant, Samuel Omwando, who termed the county an ODM zone.

The protesters, in addition to chanting pro-NASA and ODM slogans, shouted ‘Uhuru Must Go!’, as they disrupted traffic operations in the town.

According to a protester who did not want to be named, he only participated in the demos because they were promised cash.

“I am here not because I hate Jubilee but because I want to get the cash we were promised by organisers who want to create the impression that ODM is popular in the region. I don’t think that is true,” he said as quoted by The Star.

VIDEO: Watch Larry Madowo Receive Interesting Guard of Honour at Popular Mombasa Hotel < Previous
PHOTOS – A Look Inside the Lavish Lifestyle of Sh4B KRA Hacker Next >
Recommended stories you may like: