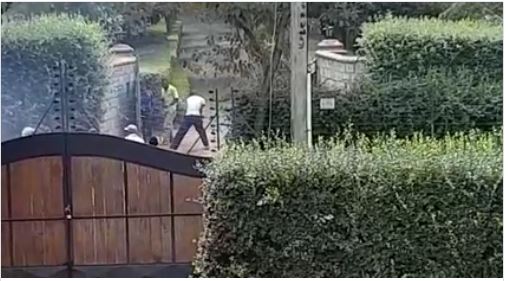 It has now emerged that the owner of the disputed property died at a Nairobi hospital last week.

Julius Kariuki Mungai died days after his home along Warai South road was invaded by the men who cut his hedge and pulled down the gate.

The cause of his death has not been revealed but Senator Mike Sonko said he will be buried at his Waithaka farm today.

Sonko, vowing to fight for justice, said on Sunday that Mungai had been paying land rates to the Nairobi government since the property’s ownership was transferred to him.

“The late Kariuki and his wife acquired the Karen property legally in 2003. They’ve been paying land rates to the County Government ever since the property was transferred in their favour the latest payment being February this year,” he posted on his facebook page.

Sonko added that a “prominent city lawyer has been alleging that he owns the property under mysterious circumstances.”

He added that the same lawyer is involved in the grabbing of another property in Upperhill belonging to one Mrs Judith Njenga, a 78year old widow.

“This rich grabber advocate had sold Mrs Njengas property to a private developer at 1billion but I managed to thwart all his cunning efforts after Mrs Njenga’s family sought for my help on time,” said Sonko.

Sonko who is eyeing the Nairobi gubernatorial seat promised to continue helping the families and ensure the land grabbers are prosecuted and the property recovered.