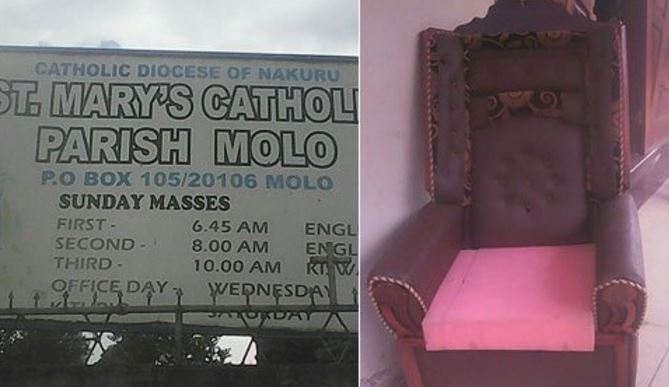 A Catholic church in Molo sub-county in Nakuru has rejected a seat donated by a popular businessman because Governor Kinuthia Mbugua sat on it.

The chair that cost Sh30,000 was donated by area businessman Joseph Kahuria who presented it on Sunday during a thanksgiving service at the church.

The businessman, who was accompanied by his family members, had called on Governor Kinuthia to test how comfortable the chair was before handing it to the clerics.

However, the presiding priest Fr Anthony Kinuthia, declined the donation because allowing the governor to sit on it is sacrilege.

“It is very wrong for you to allow a person to sit on a ‘gift’ meant for the church at the pulpit. It is not acceptable to the church,” Fr Kinuthia said before ordering the seat be taken outside immediately.

Mr Kahuria told journalists that he gave the governor that opportunity not knowing it was against the church law.

“All I wanted was the governor to assure the believers that the seat was very comfortable before it could be blessed. I was not aware that it was going against the church rules,” Kahuria said.

He added that the seat was purchased from a local store where other customers are likely to have sat on it, hence a prayer was not enough to sanctify it.

After the mass, Fr Kinuthia called the governor and had a brief chat when the county boss apologized on his behalf and that of his supporters.

“I did not know that Kahuria would call me to the pulpit. Receive my apologies and those of my supporters,” Mr Mbugua said.

Fr Kinuthia has maintained that the seat will not be accepted into the church or used at the pulpit as intended by the donor.

Owner of Karen Property Grabbed by Goons in Viral Video Passes on, Sonko Promises Justice for Family < Previous
Hilarious Meme Compilation (Tuesday March 28) Next >
Recommended stories you may like: