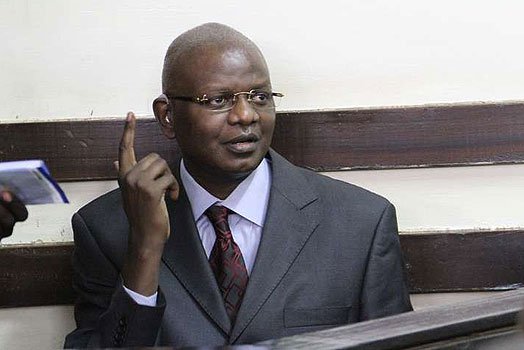 Louis Otieno used to sneak into the apartment of Ms Careen Chepchumba after bribing guards, a family friend told a Kibera court on Tuesday.
Mr Paul Ng’ang’a, a close friend of Ms Chepchumba’s family, told the inquest that Louis Otieno and the deceased were in a relationship.
He said that the university student who was found murdered in her house four years ago, told him the relationship drained her emotionally and financially.
“She had come to borrow money when she opened up to me what she was going through. She informed me that she was in relationship with one Louis Otieno, a famous person,” Mr Ng’ang’a said.
“She was killed a day after a meeting to get her out of debt. The meeting resolved that Careen should return to her parents’ house and sell her household items to pay some of the debts. She also requested to be assisted to end her relationship with Louis,” he said.
Mr Ng’ang’a, a business consultant, said that the former television news anchor would sneak into her apartment after bribing guards.
“She told me Mr Otieno would sneak into her apartment after bribing guards. Her father was concerned of her daughter’s relationship with Louis that one day he asked me if he knew of a young man to introduce to her so as to get her mind from Louis,” Mr Ng’ang’a testified.
Ng’ang’a recounted that Careen went to his office in October 2011. He said she looked frail and had lost a lot of weight.
He said that she asked him for Sh200,000, claiming she wanted to go to South Africa for treatment. He told the court she told him about wanting to get medical attention for an addiction to prescription drugs.
Ng’ang’a said that weeks before Careen died, she sent him a message saying she was sorry and did not know where to turn. Ng’ang’a told the court that he called her for a meeting as he found this alarming.
A second witness, Mr Edward Bitok, uncle to Ms Chepchumba, testified that she borrowed Sh800,000 from him saying she had a printing business to finance that never was.
Additional Reporting by Nairobi News

HILARIOUS: How Kenyans on Twitter Reacted to Kenya Power National Black Out < Previous
‘Isaac Ruto’ Addresses Jirongo’s Jealousy For DP William Ruto (Funny Video) Next >
Recommended stories you may like: