R.Kelly – I Met My Match With Lady Gaga 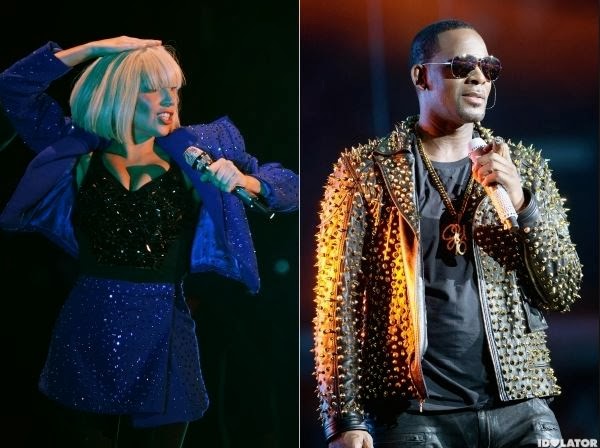 R&B star R.Kelly says he met his match when he worked with Lady Gaga on her track ‘Do What U Want’.
The R&B star, who worked with the pop star on the track ‘Do What U Want’ from her latest album ‘Artpop’, has gushed about the singer after their raunchy performance at the American Music Awards this month.
R.Kelly told The Sun newspaper: “I met my match when I met Lady Gaga. There’s no doubt about it. She’s very talented, she has a vision, she has a gift to the world.
“Then she has balls and she’s not afraid to express herself.
“I don’t think she does things to be controversial, she’s just being herself.”
The ‘Ignition’ singer’s new album ‘Black Panties’ is released on December 10 in the UK and he’s also worked with Justin Bieber in recent months.
But it’s Gaga that made a big impression on him and the pair are said to be like “Bonnie and Clyde”.
The 46-year-old said: “She’s thug, she’s ratchet, she’s beautiful, she’s corporate, she’s street, and you know when you get that all together that’s not a beauty, man – that is a BEAST.”
R.Kelly wrote 350 songs for his new album before narrowing them down to just 13, most of which are about sex.
He added: “Now I’m back to the sexual songs that the women missed – and some of the fellas, ‘cos so many tell me they get the women thanks to my music. I’ve heard it a billion times.”
– Contact Music
Rains Convert The Beautiful Machakos Stadium into a Shamba… Was it Rushed? < Previous
US Televangelist and TBN Founder Paul Crouch Dies at 79 Next >
Recommended stories you may like: