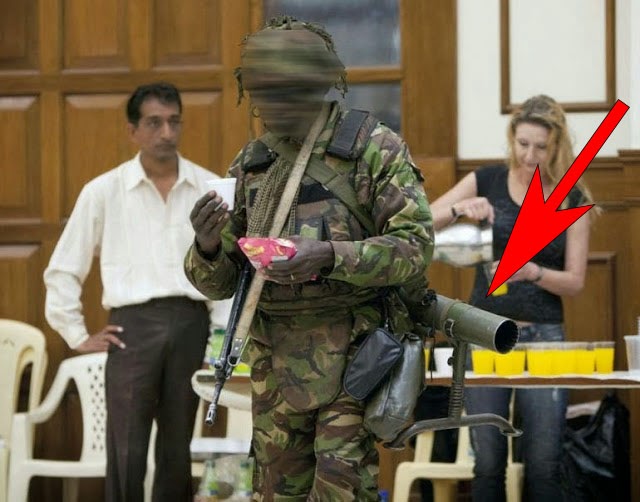 NAIROBI
The final stand of Islamist fighters who laid siege to Kenya’s Westgate mall ended when Kenyan soldiers fired an anti-tank shell that sparked a fierce fire, soldiers who fought in the battle told AFP.
The gunmen, who were holed up in a strong room in a supermarket, were killed when soldiers fired two bazooka shells, two soldiers who were both at the battle’s end told AFP separately.
“In the end we had to use full force, we had to finish with these guys,” said one member of the elite force, who said that during the bitter fighting he saw the insurgents only once.
The fighters, from Somalia’s Al-Qaeda linked Shebab, stormed the part Israeli-owned complex at midday Saturday, firing from the hip and hurling grenades at shoppers and staff.
But the attackers then retreated to a safe room on the first floor of the Westgate supermarket, according to the descriptions provided separately by the two soldiers.
From there, they held out against the Kenyan troops.
Two Kenyan commandos leading the assault were killed while trying to force open the door of the strongroom.
They were shot by a fighter with a heavy machine gun, in an elevated site where he acted like a sniper, blocking the commandos from moving forward, said the other soldier.
“We don’t know how many they were inside the safe room. I never saw them,” the soldier said, claiming that he did not know if any hostages were with the attackers.
Finally around midday on Monday, the soldiers brought in heavy weaponry.
They fired 84-millimetre shells from a recoilless rifle — or shoulder-held bazooka — whose sharply pointed tips are designed to piece armour plating, before exploding and causing a fire.
A few minutes later, thick black smoke rose above the rooftop car park, above the first floor of the supermarket.
At the time, government officials said the fire had been caused by burning mattresses torched by the gunmen to provide a distraction.
About 24 hours later and weakened by the flames the rear part collapsed, with several cars tumbling down into the gaping hole created.
“It was the only option,” said one of the soldiers. “Sometimes you’re supposed to use deadly force to save other lives,” he said, conceding that his could have resulted in “collateral damage” to any hostages present.
The siege was declared finally over on Tuesday evening.
– AFP

10 Signs Your Girl is A Gold Digger < Previous
VIDEO – Westgate Tenant Surprised To Find Empty Beer Bottles… Did KDF Drink Them? Next >
Recommended stories you may like: