10 Signs Your Girl is A Gold Digger 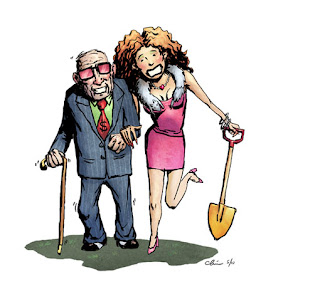 1. She asks you to buy her something or borrow money early on in the relationship.
Unless you are fine with the idea of paying for your sex and the company of this woman, this is a red flag.


2. She wears a long weave down her back, cakes on the make-up and doesn’t have a job.
This is probably controversial for a lot of people, but we need to throw the political correctness in the trash if we are talking about saving you money, embarrassment and extended headaches. Trust me; if she has a long fake weave down her back, sans the job, you should be “extra suspicious” of her intentions. If you must, make sure you put these types under several stress tests to determine if they’re genuine or not.


3. She never offers to pay and only says thank you occasionally … as if she’s entitled to your spending.
A man should pay for the first date and a thank you is necessary. In terms of indentifying diggers, a thank you after a small dinner means more than her going down on you when you get her back to the crib. If after several dates she has never offered to pay for anything, you should be suspicious.

4. She only wants to go to expensive restaurants.
After impressing her on the first or second date, take her to a few inexpensive places like Red Lobster and see how she reacts. If she reacts unappreciative or complains, she is either a digger, or may be too high maintenance. Don’t be a punk or weak for the panties and call the digger back. If you do, you may as well hire a dime quality call girl which will save you some money and more than a few migraine headaches in the long run.

5. She has dated multiple professional athletes.
Food for thought: Why has she dated guys on four different national football and basketball teams? Do these brothas have the most character and best personalities? What ball players are always sure to have is money. Guess what? So do you. Diggers and ball players have a long history together.

6. You catch her online reading the lipstick alley message board.
This community is known to have an abundance of life-long diggers who share war stories and battle strategies. If you go forward and this girl turns out to be a digger, you are likely to be put on blast by the vicious and sneaky “sisters” who are part of this digger community.

7. She wants intimate details about how much you make.
If she is a dime and you are eager to soak up her panties, you may just want to play along, sex her, and then not call the digger back. She played a gold digging poker game with the wrong guy and lost.

8. She doesn’t demand you wear a condom or “says” she will go on birth control early in the relationship.
Diddy reportedly had to pay more than $4.5 million in child support for his youngest son Christian. He has had three more kids since then. You get the picture. A hard core digger will see kids as a lifelong financial insurance policy. Even a condom may not save you as there are digger “baby strategies” that can compromise the standard condom.

9. Physically speaking, you two are completely mismatched.
You have to be objective here. If you look like Craig Mack or weigh 400 pounds and the girl you’re dating looks like Nia Long in the Boyz N’ The Hood days with the little catholic school skirt, it may not be your personality, game, or funny jokes doing the work here. You have to be honest with yourself in determining how good your game really is. Your game is likely not on the level as “RP” or Bishop Don Juan on American Pimp. It’s ok to go after dimes but be careful if things look “stretched” from your usual dating experiences.

10. She only lets you hit when you buy her something.
If the only time you get some is after an expensive date or if she only hooks you up with brains after she gets an expensive gift, you probably have a digger on your hands. She is attaching sex to money and this is part of gold diggings 101
Follow @nairobiwire

Advertisers Paid Sh 35 Million For a 30 Second Ad During Breaking Bad Finale Yesterday < Previous
Raila Odinga Junior’s Tribute To Mbugua Mwangi… The President’s Nephew Next >
Recommended stories you may like: