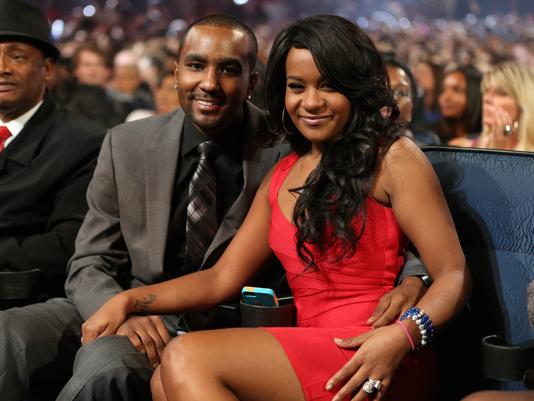 Bobbi Kristina Brown is definitely engaged to Nick Gordon.
We reported this in October 2012, when Lifetime’s reality series The Houstons featured Bobbi Kristina telling her family the news: “We’re engaged.”
But to doubters and haters, Whitney Houston’s daughter is saying it again. In an Instagram photo caption, she refers to Nick as her “gorgeous fiance.”

And in a Facebook post Tuesday, she gives a lengthy tongue-lashing to detractors:
‘YES, we me nick are engaged,” she says.

She adds, “I’m tired of hearing people say ‘eww your engaged to your brother or if Whitney was still alive would we be together or would she approve of this.’ Let me clear up something, we aren’t even real brother and sister nor is he my adoptive brother. My mom never adopted him. In fact, mommy was the one who even said that she knew that we were going to start dating. My mom knows me better than any of you. A lot of yall are saying that yall are only saying this all out of love. Which is bull because if that was so, all you would want is for me to be happy.”
She continues: “People need to seriously stop judging my relationship. Pretty sure it’s my own decision who I want to be with. Yes, my relationship may not be perfect. We will have rough patches, just like every other relationship. And we have had our rough patches. You may or may not agree with my relationship. You may or may not respect it. Judge me, go ahead. Your opinions are yours and mine are mine. It is my life and not yours. The decisions I make have nothing to do with you. Goodnight.”

Now Kisumu County Reps Want Bodyguards < Previous
Justin Bieber Calls Bill Clinton To Apologize After Using The F Word on Him Next >
Recommended stories you may like: