You Can Now Pre-order Your Samsung Galaxy S4 From Safaricom, With Only Sh 15,000 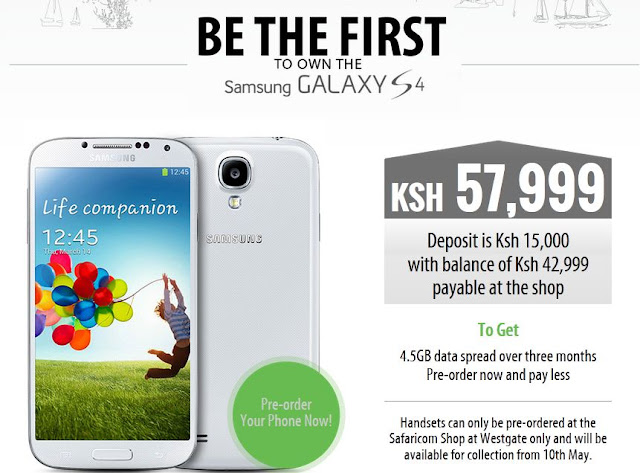 Safaricom is giving its customers an opportunity to own the new Samsung Galaxy S4, by ordering for the device in advance.
With only Sh 15,000, Safaricom will be sure to reserve you a unit of Samsung’s latest high-end mobile phone yet. The device will retail at Sh 64,999 and will be available in the country from next month.
However, those who Pre-order will get a Sh 7000 discount.

Once you deposit Sh 15,000 with the giant mobile service provider, you can collect your device from May 10th at Safaricom shop Westgate, upon paying the remaining Sh 42,999.

The device was announced in New York City on 14 March 2013, and different launch dates for different countries have since been set. Kenya’s is May 10th.

Among the notable features in the Galaxy S4 are:

Dual Camera photos and recording – Take photos or record using both cameras at the same time.

– Smart Scroll/Smart Pause – Scrolling by just staring at the phone and tilting it.
Air gestures/Smart Call Accept – Receive calls by just waving at it.