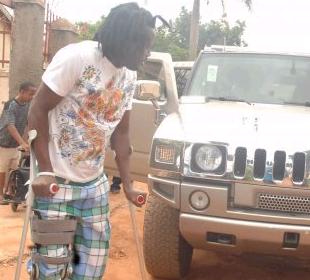 Bebe Cool n His Hummer are back in the news. In 2010, he brought in the used Hummer H2,  and to this he said, I can now be called Munene Munene or Big Size.
Just yesterday, the ‘Kamwako’ singer branched of at a filling station for petrol but the pump attendant accidentally filled the car with diesel. Bebe Cool was lucky that it was diesel being put in a petrol car because it could have been worse had it been the other way round.
The folks at Petro city quickly got this fixed as the damage was not severe and therefore less costly. Had it been petrol in a diesel engine, then this could cause extensive damage to the engine after diesel was sucked into the cylinders.
Bebe reached out to his fans to let them know about his ordeal, “Imagine a pump attendant has put diesel in ma H2 instead of petrol and he says he was excited to see me.” This got a good number of fans commenting, most of them saying that he should calm down.
But as always not all of them will ride on the same horse with him and this is what some had to say.

“That’s easy and simple…add in petrol and the Hummer will have a buffet this time.” Another wrote: “You should sue the petrol station and demand for 800m.” It should be noted that earlier on, Bebe Cool had promised to sue Bukedde Newspaper and to this, he fulfilled his promise.
Last Tuesday, through his lawyer, David Sempala, Bebe furnished Vision Group with a letter of intention to sue unless they compensated him with Shs800m for having written that his dreads were cut off which wasn’t the case. They are yet to respond to this.

But before Bebe Cool could put the Hummer issue to rest, he thanked the team at Petrol city for having addressed the problem. By then his page was streaming will all sorts of comments from both haters and fans.
Reacting to negative comments on the matter, Bebe Cool said: “Kakati zino embata ezili ku page ya ba fans bange zikolakoki…” Meaning that “What are these ducks doing on my fans page.
Uganda Online

A Kenyan Politician Application Form < Previous
Smart Octopus Is Manifest Nonsense.. What Kenyans Think of Their Opinion Poll Next >
Recommended stories you may like: