Fidel Odinga: My New Wife Is Not Cheating On Me. 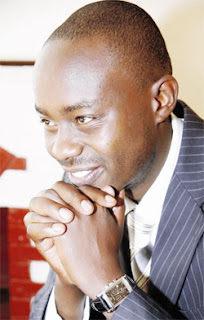 Prime Minister Raila Odinga’s son, Fidel Odinga has rubbished a story appearing on the internet a few days ago, that his wife was cheating on him with his best friend. According to a local blog, Fidel caught his new wife, Lwam Bekele, having sex with his best friend, believed to be Don Bosco Gichana, after coming home unexpectedly early from a night out with friends. Another post on the same blog claimed that Don Bosco is also the reason why Fidel divorced his first wife, following a similar occurence. Allegedly, Fidel forgave Bosco claiming that their friendship stretched a long way. He instead chose to leave his cheating wife.
According to the Star newspaper, Fidel was really disappointed when he read the gossip. “Fidel and Lwam are very happy contrary to these allegations. He is shocked and is wondering how these rumours came up. He just wants to be left alone to enjoy his marriage,” a source close to the prime minister’s son told star newspaper’s word is. The couple has been married for only one month.
© nairobiwire.com
Kibaki’s Aide-de-Camp Resigns And Joins Politics < Previous
Ruto’s Sh 100,000 a Plate Dinner Raises Sh 41 Million Next >
Recommended stories you may like: