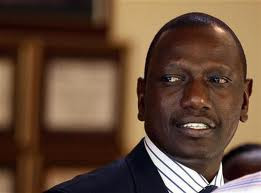 URP presidential candidate William Ruto last night raised Sh 41 million during his Sh 100,000 a plate dinner. The dinner was held at the Laico Regency hotel, and attracted several MPs. Among the biggest donor was Dujis MP Aden Duale, who gave Ruto Sh 2.5 million. Belgut MP Charles Keter donated Sh 1.8 million while Cherangany MP Joshua Kutuny gave Sh 1 million.
Raila held a similar fundraiser in July and managed to raise Sh 26 million, 15 million less than Ruto. Kalonzo is also expected to have a similar dinner, only that the price per plate is Sh 50,000. The dinner was scheduled to be held this Friday but has since been postponed to next week.
Among those who attended Ruto’s dinner were: Under fire minister, Chirau Ali Mwakwere, assistant ministers William Cheptumo and Kazungu Kambi, MPs Mohammud Ali, Isaac Ruto, Fred Kapondi, Sophia Abdi, Raphael Letimalo and Chachu Ganya.
Fundraising dinners are set to be the next battlefield as we approach the next elections, as every candidate will strive to outdo the other. President Kibaki hosted a Sh 1,000,000 dinner towards the 2007 elections and though the amount raised was not made public, it is estimated to have been well over Sh 100 million, considering the attendance.
The trend is only picking up in Kenya, but has been a tradition in other nations, especially the developed ones. Recently, President Obama was hosted by actor George Clooney for a campaign dinner that raised over Sh 1 billion.
© nairobiwire.com
Fidel Odinga: My New Wife Is Not Cheating On Me. < Previous
New Harambee Stars Coach Sh 104 Million Salary Next >
Recommended stories you may like: