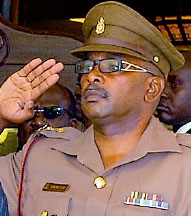 President Kibaki’s aide-de-camp, Lt Col GK Muturi, was among the many civil servants who quit to seek elective office. One month ago, we ran a story of his desire to join politics. Then, it was not clear which office he would be seeking, but now it has been reported that he will be contesting the Mbeere South parliamentary seat.
Col Muturi replaced Josiah Mrashui in May 2010 and has in turn been replaced by Col Peter Njiru from the military headquarters. Col Njiru was first seen with President Kibaki in parliament on Tuesday.
This is for sure set to be a very interesting race, since for the first time, Kenyans will find themselves listening to a person who ways always behind the president, but rarely opened his mouth.
Like Col Muturi, several other civil servants have resigned so they can venture into politics. Among the first was presidential aspirant James ole Kiyiapi who resigned in April. Others are government spokesman Alfred Mutua, AP commandant Kinuthia Mbugua, Presidential Advisor on Coalition Affairs Prof Kivutha Kibwana, Higher Education Loans Board chief executive Benjamin Cheboim, Communications Commission of Kenya chairman Philip Okundi, Kenya Airports Authority board chairman Martin Nyaga Wambora, Kenya Wines Agency board chairman Moitaleel ole Kenta, several PS’s and diplomats, Nairobi town clerk Roba Duba and Phillip Kisia.
© nairobiwire.com
Ida Odinga Takes Congestina Achieng To Hospital < Previous
Fidel Odinga: My New Wife Is Not Cheating On Me. Next >
Recommended stories you may like: