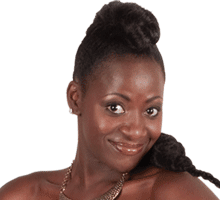 Ugandan TPF contestant Sharon, has spoken about her painful childhood. She says that her father was a very brutal man who would beat them up whenever the opportunity arose.
” Our father would beat us for hours on end for a small mistake that we made. He was not only harsh but also a drunkard. He chased our mother away and we were left to live with him. Life became difficult because we even stopped going to school and even got worse when he left us. Our mother who had gone back to her maternal home, had come to pick us but could not manage to feed us so we were taken to different homes where they treated us badly. This made it difficult for us to go to school,” She said.
Sharon said that their lives changed for the better when her mother re-married a white man.
“My mother got married to a mzungu who has been taking care of us and he even pays my college fees.”
The Ugandan says that if she wins the Ksh 5 million, she will use it to record an album and promote it.
Additional reporting by the Star
© nairobiwire.com
Tahidi High Faces Closure Over Excessive Smoking. < Previous
Murang’a Police Spending Too Much Time On Facebook Warned By Their DC Next >
Recommended stories you may like: