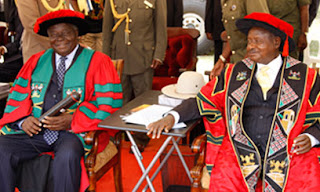 President Mwai Kibaki was awarded an honorary doctorate by Makerere University during its 62nd graduation ceremony. The ceremony was graced by among others, President of Uganda Yoweri Museveni. Kibaki was a student and later lecturer at the university. He graduated with a first class honors in Bachelor arts in  economics, History and Political Science. After leaving the university, he came back to Kenya to start a long life as a public servant and still holds the record of being the longest serving finance minister in Kenya.

Museveni described  Kibaki as an intellectual giant whose leadership had laid the foundation of social, economic and political transformation in Kenya. In his acceptance speech, Kibaki acknowledged that his leadership foundations were laid during his time in Makerere University.

“Many of my leadership skills were developed and nurtured here. Now, fifty two years after my departure from Makerere, I reflect with gratitude on my long career, starting here as an Academic, continued into politics and public service in Kenya, and culminated in my election by the people of Kenya as their President.” said Kibaki.

Kibaki could not conclude without commending the university for producing an electric car, calling on other institutions to emulate Makerere.

Filesonic Diasables file Sharing After rival Megaupload Is Shut down. < Previous
Kenya The Second Most Tweeting African Country. Next >
Recommended stories you may like: