The Story of Ghetto Radio’s Bonoko 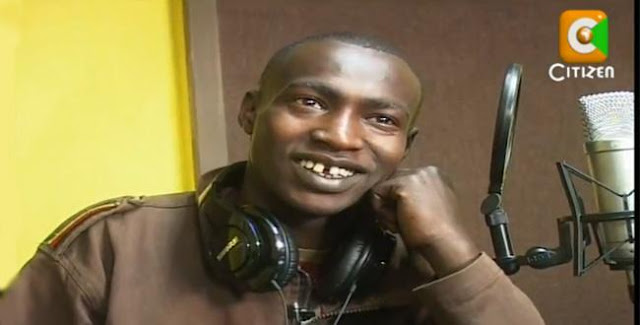 This is a real Ghetto story about a young man who used to live in the streets of Nairobi. James Kang’ethe ‘Tete’ Kimani or better known to you as ‘Bonoko’ who has now become a kind of a cult figure in the Kenyan society.

‘Bonoko Deh’ as he is popularly known by his Ghetto Radio fans is now a celebrated radio presenter along Mbusii deh. He owes all his success to Mbusii, whom unlike every other music personality, chose to give him credit.
Where was he born?


Bonoko was born on the streets. As a baby he slept with his mother under the verandas, as an independent street kid he preferred other places, like the gutter under the highways.

What changed?
The government started to pick kids up from the streets in 2011 and send them to special schools to be reformed. After being caught Bonoko ran away twice, once walking for a week from Kakamega in Western Kenya to Nakuru, on his way back to Nairobi.
“The watchmen at these schools beat us too much”, he complains. He ended up completing only two years of primary school education.

What did he do when he was back in Nairobi?
Back in Nairobi Bonoko made Ngara his home and place of work. Kipande became his close friend, a young butcher who sold mutura, a traditional Kikuyu sausage, on the streets. “Me and my street friends gave him our pennies for safekeeping, and he gave us leftover meat. He was a good man”.

What kind of challenges did he face in the streets?
His big rival on the streets was Kisi wa Central, a nickname for a cop who exhorted money from people in the neighbourhood. “That cop had already killed some kids. One day a rich man hit me with his car. He wanted to take me to hospital and gave me money as compensation. Kisi wa Central took it and told the rich man to get lost”.

What is the origin of the name ‘Bonoko’?
One day Bonoko’s life took an unexpected positive turn. Kisa wa Central had apprehended Kipande because of urinating in an alley. Knowing the reputation of the cop, Kipande fled. Kisi wa Central shot the butcher dead and planted a fake gun near his body, a ‘bonoko’ in local slang. James Kangethe Kimani saw it all happening and from that time onwards he would be known as Bonoko.

His voice has been used by DJ’s and programmes for funny clips & mixes. What was his firstreaction when he heard his voice on radio?
I first began hearing my voice on phone ringtones then I finally heard the Bonoko song on Ghetto Radio and I was overly excited! I could not believe I was on radio. Since I live on the streets and I have no radio I would time between 12-1pm daily and go to a place where Ghetto Radio was aired because they would always play the song and I would be so happy.

After the song became popular what changed?
My boys started saying I was rich and I was just pretending to be a poor street boy. They started pressuring me to buy them tea and questioning why I was sleeping on the streets.

How did he start with Ghetto radio?
When I came in for the interview, the presenters were very friendly; they bought me lunch and made me feel at home. That night Ghetto Radio was having an event at Kenya Poly and they took me along and I even performed the Bonoko song at the gig.

That was the beginning of my friendship with Ghetto Radio crew. They have given me clothes, food and most importantly accepted me. I feel at home at Ghetto Radio and I thank God.

How did he become a trainee presenter?
The boss Maji Maji told me since I hang out at Ghetto Radio he will give me a chance to train as a presenter. I feature in all shows but mostly co-host with Mbusi on Goteana 3-7pm weekdays and on Madree 9-10am Saturday with Mbusi and Jackie.

What are his final words?
Ghetto Radio has changed my life! It is a station for real people. It is impacting people positively. The Madree show is tackling issues of drug abuse while Kenyan Tuesday theme is promoting patriotism. Ghetto Radio has good people with big hearts.

You can find Bonoko co-hosting in morning and drive hours on Ghetto Radio 89.5. Courtesy

Loading...
Redsan’s Mother Admitted To Hospital < Previous
President Uhuru Describes His Love For Afrosinema Next >
Recommended stories you may like: