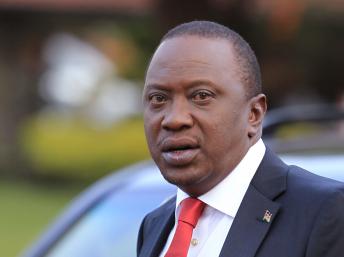 President Uhuru recently addressed Kenyans living in the UK at the London Intercontinental hotel. This was during the London conference on Somalia.

Here, Uhuru opened up about his life as president, and all the privileges it had taken away from him. He described how anti-social a job, the presidency is.
His private life is over, and he cannot do as he used to when he was not president.
Uhuru said that the presidency was not a simple matter, but one which requires self-sacrifice and self-denial as well as unprecedented discipline.

According to him, it is no longer possible for him to visit the many places he wished he could after work. His security has to be consulted and possibly prior preparations made. The president also told the UK Kenyans of how he spends his evenings since assuming office. After dark, he remains indoors watching news and … wait for it… Afrosinema. His dear wife by his side.
That possibly explains why the wife looks much happier these days, after all, the husband is home anytime from 5pm.

Something else happened during the London meeting, as the Standard is reporting. First Lady Margaret Kenyatta cemented her shy reputation further. Reportedly, the crowd demanded she addresses them with shouts of “mama, mama!”  President Uhuru, well aware that his wife is dead shy, could not control his laughter.
She however gathered enough courage and walked towards the microphones. The hall fell silent, waiting for the first lady to make her maiden speech.
All smiles, the Margaret Kenyatta mumbled some inaudible words, which even the closest microphone couldn’t pick, before walking back to her seat.

The Story of Ghetto Radio’s Bonoko < Previous
10 Things You Did Not Know About Brenda Wairimu Next >
Recommended stories you may like: